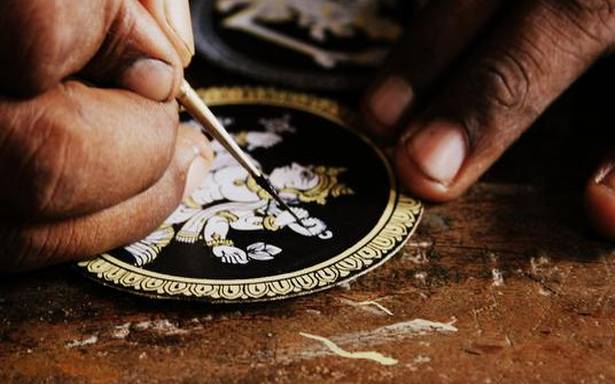 Gearing up for a game of cards this Deepavali? Go back to the 16th Century with a luxurious, hand printed ganjifa deck

Artist Banamalli Mohapatra is busy creating decks of cards for Deepavali, with cotton saris, squirrel hair brushes and crushed stone colours. Athrangi ganjifa, with 96 cards hand-painted by Banamalli, puts the spotlight on ganjifa this festive season. One of the world’s oldest playing cards, ganjifa traces its origin back to the 16th Century. Though Persian in origin, over a period of time, the art form embraced the pantheon of Hindu mythology in its expressions.

Each card is made through an intricate and long process using old cotton saris that are painted with squirrel hair brushes in crushed stone colours. In the past, ganjifa cards featured paintings of wrestlers, acrobats, swordsmen, musicians, animals and birds. The iconography, however, has changed today and is now largely centred around devotional themes.

“It was introduced by the Mughals but the motifs then were influenced by their culture,” says Neeta Shah, GM of Bangalore-based GoCoop, which showcases the cards on its website along with artisan partner organisation, Potli. “They bring to life, mythology, history and social mores,” she adds. As card games are popular on Deepavali, sales are targeted at this time of the year.

ganjifa cards became popular in different forms — the most popular being the Dashavtar ganjifa. others include the mughal ganjifa, rashi ganjifa and Ramayan ganjifa. “When artisans in Odisha started hand painting them in pattachitra styles, it predominantly became mythological figures. For example, various forms of Devi, Vishnu and Krishna. Especially because Odisha is also home to Jagannath Puri temple, one of the incarnations of Vishnu. The handcrafted dasavatharam set depicts every single form of Vishnu,”explains Neeta.

In Athrangi set (Ath for the numeral eight and rangi for coloured), each of the eight suits is depicted by stylised birds drawn in pattachitra style and printed with gold edging. Drawn freestyle, the birds flit across the card in no particular order. Each suit depicts a function of the royal court, such as the crown, the treasury, the armoury, the mint and so on.

The cards lend themselves to variations of modern games such as poker and teen patti; the three-card version popular in India. Each suit consists of one king, one wazir, and 10 numbered cards. After shuffling, the cards are placed face down on a white cloth, then divided equally among the players. It also builds a sense of community as these cards tell stories. While the playing ganjifa cards are typically circular, depending on the artist’s imagination, there are rectangular decks too.

The cards were originally used for storytelling, but now are marketed as wall panels and coasters as well. “The dasavatar collection did very well during Navratri. The cards are still hand-painted, but we are trying to find a utilitarian value to it, since they highlight a tradition,” says Neeta.

Today, though ganjifa has disappeared into the annals of history, in some pockets across the country, people still make the cards and play this game. These include Sawantwadi in Maharashtra, Bishnupur in West Bengal, Puri in Odisha, Mysore in Karnataka, Nirmal in Andhra Pradesh, and Jaipur and Mewar in Rajasthan. Says Neeta, “We have created a modest revival in the game amongst museums, craft aficionados and traditional game enthusiasts which is currently a source of sustained income for the artisans.”