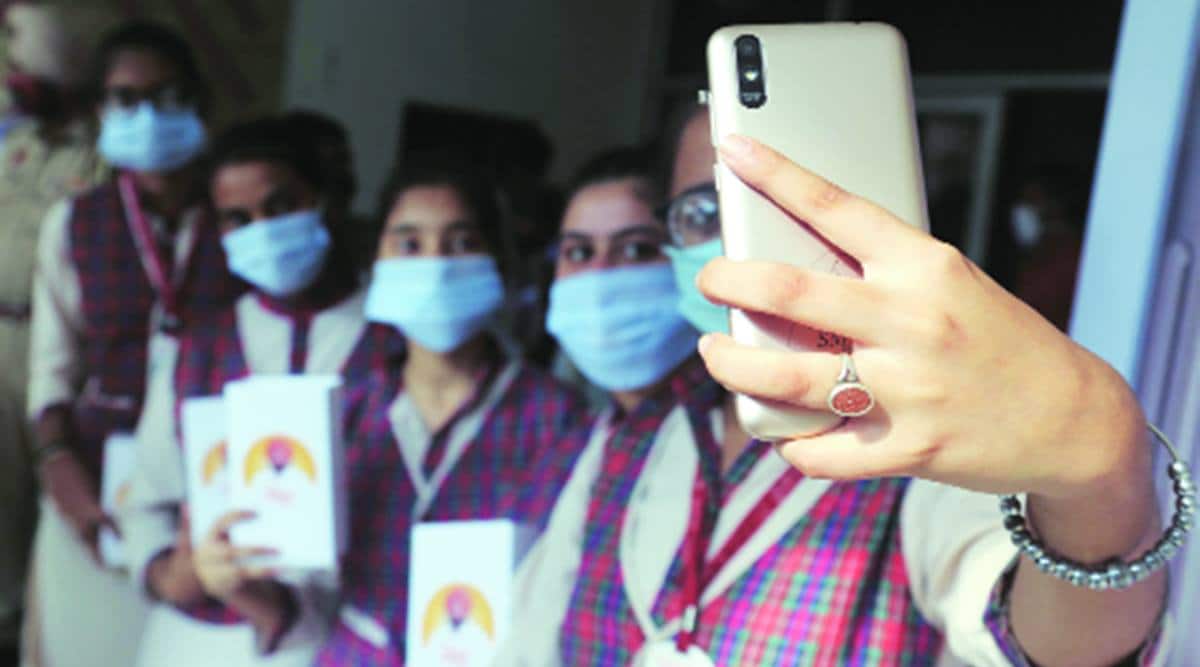 Simultaneous distribution of phones was done at 26 places by various ministers, MLAs and others across the state. Each minister handed over 20 phones each in various districts to launch of the scheme, which marked the beginning of fulfilment of a major poll promise of the Congress government in the state.

Out of these, 87,395 are boys and 86,620 are girls, with majority in the OBC and SC/ST categories – thus bridging a major divide that was obstructing these students from affordable access to online/digital education. While 36,555 beneficiaries are OBC students, 94,832 are SC and 13 ST students. The bulk of the students – 1,11,857, are from rural areas, and the remaining in urban government schools.

The CM, who launched the scheme on the auspicious occasion of Janmashtami and International Youth Day through video conferencing at the Secretariat this afternoon, said people believe in the promises listed in the election manifesto and it was, thus, his duty to ensure the implementation of each one of them, a government statement said.

When the Congress listed smartphones as a poll promise, it was to provide global connectivity and empower the poor youth who could not afford them, Amarinder was quoted as saying adding that in the present pandemic situation, these phones had assumed a bigger importance as they had become a necessity for education continuity. He said that the plan was to distribute the phones in March but the process got delayed due to Covid.

The Chief Minister said he wanted Punjab’s students to be abreast with the latest technology which they can use effectively for their education. He added that government schools, which had seen a major transformation over the past couple of years, needed to be supported through technological initiatives by the state government.

Gagandeep, a girl student and a labourer’s daughter from Hoshiarpur, told the Chief Minister on video that though she had got 85 per cent in Class 11, she had lost out severely in studies over the past few months due to lack of smartphone. With this phone, she said, she would now be able to fulfil her dreams. The Chief Minister assured her of all help to pursue her dreams.

Pointing out that the Smart Connect Scheme was in line with the vision of the Chief Minister, Education Minister Vijay Inder Singla said it would help government school students download course material and old papers etc to prepare for their Board exams.

Industry Minister Sunder Sham Arora said his department, which was entrusted with the task of purchase, had bought one of the best smart phones in the market. The scheme would prove to be a boon to the needy students, in particular, in government schools which were at a disadvantage compared to private schools in terms of access to technology, particularly during the Covid pandemic, which had necessitated a shift to online education.

Youth Affairs Minister Rana Gurmeet Singh Sodhi said after farm loan waiver and seamless procurement, the Chief Minister had now fulfilled another major promise of the state government. The government had done this despite the acute financial crisis in the state, he said.

Punjab Pradesh Congress Committee (PPCC) president Sunil Jakhar, who was present at the function with CM, said the scheme would break the barriers of poverty, with even SC/ST and OBC students getting access to online education.

He said that the SAD-BJP government had promised computers, laptops, tablets during its tenure, but had failed to deliver on its promise.