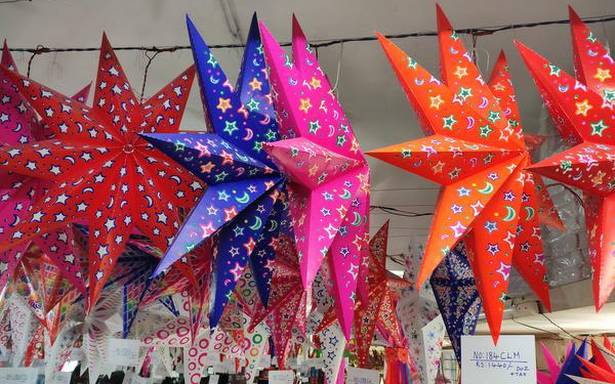 Established in 1945 by Mangalorean Joseph D’Souza, St. Joseph’s Art Industries in Kollam was perhaps the first to begin printing greeting cards in Kerala before moving on to paper lanterns

As a child, I used to collect Christmas cards. Pop-up cards, shiny ones with glitter, those with cute pictures of lambs, angels with lacy wings, Santa Claus, Christmas lanterns and also those of white Christmases in far-away lands. Little did I know that the greeting cards with beautifully depicted silent nights, angels et al were made in sultry Kollam, 70 km from Thiruvananthapuram.

On a trip to Tillery, Kollam, I visited Josarts where the first greeting cards are said to have been printed in Kerala. Today, it is famous for its star-shaped lanterns that have buyers from all across India and abroad during Christmas season.

The frenetic activity in a nondescript building in a quiet lane is a common scene for residents in the area. Here, star-shaped paper lanterns in multiple hues and designs vie for attention. Customers, many with children in tow, walk around the outlet on the first floor of the building, trying to choose from the many paper lanterns suspended from the ceiling. On one side of the outlet, women are busy packing the lanterns to be despatched to different places in India; they have no time for small talk or conversation.

Crescence D’Souza, partner of Josarts in Kollam, Kerala, with one of the paper lanterns being made at his press | Photo Credit: Saraswathy Nagarajan

Crescence D’Souza, son of Josarts Press founder, late Joseph D’Souza, says the pandemic had been a huge blow to their business as all activities, including exports to Germany and the US, had to be stopped. “In 2021, we are slowly limping back to normal. Export orders haven’t resumed and we are depending on domestic sales.”

Since 1961, Josarts Press had been making greeting cards that were sold across India. A talented artist and sculptor from an agrarian family in Mangalore, Joseph came to Kollam in August 1943 at the behest of the Franciscan Capuchin friars. Their Friary at Kollam was then a major seminary of the Capuchin fathers.

Crescence recounts his father’s transformation into an entrepreneur: “The statuary department at St. Antony’s Friary in Kollam at that time was in need of an artist to rejuvenate it. Since dad has already been working with them in Mangalore, he was requested to come to Kollam to make statues for churches.”

When the friars shut down their statuary business in 1945, they encouraged Joseph to turn entrepreneur and suggested that his new enterprise be named St. Joseph’s Art Industries. To finance his business, Joseph sold his ancestral property in Pakshikere, Mangalore.

“Through the good offices of Bishop Jerome Fernandez he was granted a plot of land next to St. Anthony’s Friary. At the young age of 21, the young Joseph launched his first business venture,” writes Betsy D’Souza in a tribute to her father on his tenth death anniversary.

Beginning with making statues and selling religious artefacts and spiritual books and Bibles as well as greeting cards imported from Belgium, Italy, UK, Germany and the US, Joseph went on to printing cards in Kollam following a Government ban on import of foreign greeting cards. The talented artist began designing and drawing the cards himself for Christmas, New Year, birthday and other festive occasions.

Betsy continues: “Joseph set up a workshop to train workers in the processes of modelling, carving, casting and assembling of statues. He also opened a store for display and sale of statues, religious artefacts, and spiritual books.”

Christmas time is when all are hands are on deck at atr Josarts in Kollam, one of the biggest and oldest suppliers of star-shaped paper lanterns in Kerala | Photo Credit: Saraswathy Nagarajan

Joseph realised there was a market for Christian spiritual books, Bibles and greeting cards. Initially, the greeting cards, pictures and liturgical books were imported from Belgium, Italy, the UK, Germany and the US.

Joseph knew that they could make the greeting cards themselves without incurring heavy overhead expenditure. The talented artist he was, he began designing and drawing the cards himself for Christmas, New Year, birthday and other festive occasions.

Betsy recalls that that to keep in touch with changing tastes of consumers, Joseph hired artists to design images and graphics with appropriate verses.

Crescence says the first greeting cards designed by them were printed in Sivakasi, Tamil Nadu. Joseph went on to establish his own press there and one of his sons was given overall charge of the press there. Eventually, when skilled workers at Josarts left to begin their own outlets to make cards, there was competition. Joseph to imported the then latest Heidelberg printing machine from Germany to improve the quality of the cards. The D’Souzas still had an edge over their competitors. Nevertheless, the fall in sales of greeting cards was a clear message that it was time to move on.

With the same diligence and entrepreneurial imagination, the family began making lanterns that were much in demand. “We brothers had already been travelling to get orders for the greeting cards. Now, we also started selling the lanterns. There was a flood of orders and we did well,” says Crescence.

By the time Joseph passed away at 83 in 1983, there were branches of St. Joseph’s Art Industries in Kollam, Bengaluru, Mangalore and Sivakasi.

Although much of the work of designing and printing the paper for the lanterns are mechanised, folding the paper to make the lanterns is labour intensive. Outsourcing the work to women in five coastal villages such as Eravipuram and Thope have been a symbiotic move. “The material is send to their homes and it helps the skilled women to earn a living. Although sales peak in the run-up to Christmas, preparations for this season go on through the year. Having skilled workers help us and we are able to help the women too,” says Carol D’Souza, Crescence’s wife.

Paper is colour printed in different patterns while one group of workers is busy cutting it up to be folded into star-shaped lanterns. In another section of the outlet, two graphic designers are creating designs on the computer.

“My siblings and I used to spend our holidays here and we know each process of the lantern-making,” says Crescence, skilfully folding a pink-coloured paper into one triangle of a star.

Even as he walks me around the factory, phone calls keep interrupting our conversation and workers from different units keep joining us for clarifications and directions from Cresence.

For the D’Souza brothers, it is the season to usher in Christmas cheer with their lanterns.