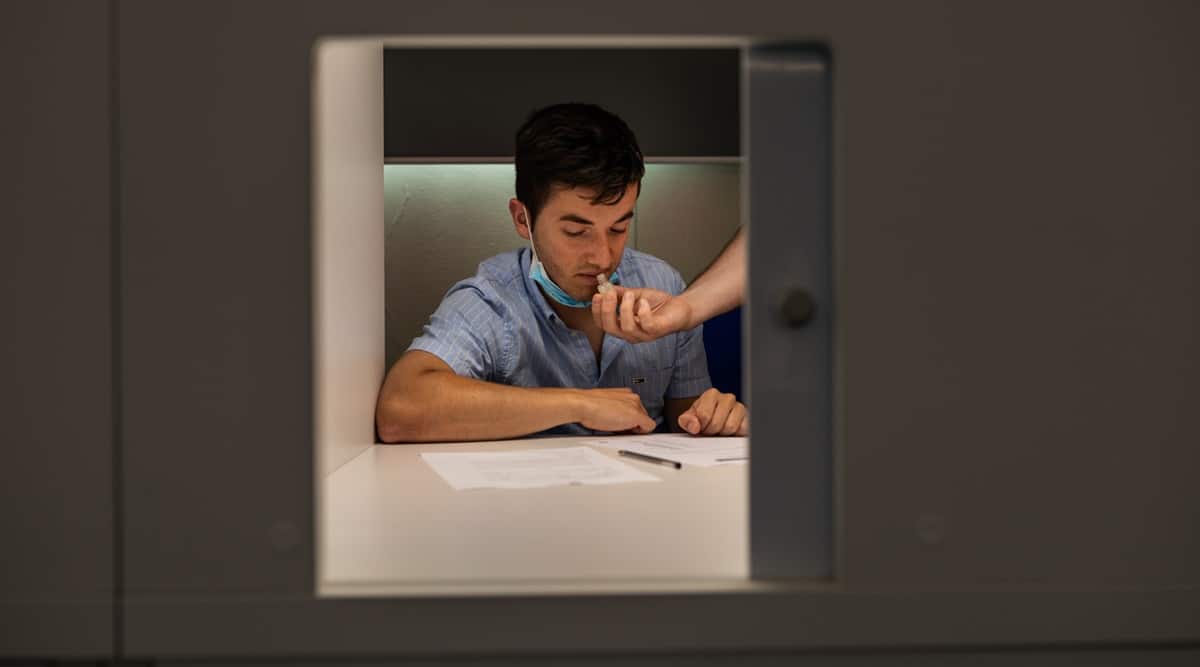 Michele Crippa’s palate was renowned in Italy’s gastronomic circles, capable of appreciating the most subtle of flavors.

He taught young chefs to distinguish between Parmesan cheeses of different ages — and between milk extracted at different altitudes. He reveled in the perfume of cod smoked over pine cones. In his reviews for Italy’s preeminent food magazine, he discerned the scent of Champagne in raw Nicaraguan coffee beans and tasted traces of green peas in a blend from Kenya.

Like so many people who have contracted the coronavirus, Crippa lost the ability to smell — so intrinsic to tasting food — and when it returned, it came back warped.

An expert who once could describe the sea breezes and volcanic soil that he detected in sips of a Sicilian white wine now could do little better than calling it “cold.”

On a recent morning, Crippa, 32, stood in front of a group of similarly afflicted Italians in the city of Piacenza in northern Italy.

They had gathered in a university lab equipped with aspirators to remove extra odors from the air, a place often used by professional tasters to evaluate the origins and quality of olive oils, coffee blends, grappas and chocolates.

But this group just wanted to taste anything again and had turned to Crippa for help. 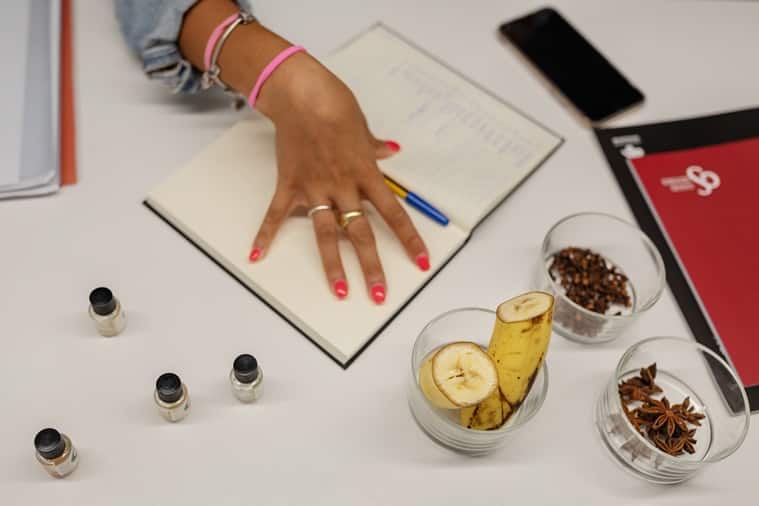 Crippa did not surrender, and his persistence has paid off, at least somewhat.

He retrained himself over months, with the help of sensorial analysis experts who train winemakers and truffle hunters. While he believes he has a long way to go before getting back to his former feats of smell, he has emerged in Italy as a symbol of gastronomic resilience — and of hope that the lingering effects of COVID-19 can be surmounted.

For those who “share the same life twist,” as Crippa refers to his malady, he has organized a course of therapy with help from the Tasters Research Center, a group of food science professors who believe that the sense of smell is connected to the hypothalamus, the part of the brain that plays a crucial role in controlling emotions.

Like many doctors around the world, who are now recommending training at home, Crippa and his partners think recalling a memory connected to a smell can help reactivate the neural pathways disrupted by the virus.

They started organizing online training sessions, posting tutorials and spending hours giving personal advice and pointers. National radio and TV shows have invited Crippa as a guest, and magazines have requested to share his 10-point guide to recovering the sense of smell and taste. He also is developing a recipe book for people who lost their sense of taste or have found it distressingly transformed by the virus.

As reports of his rehabilitation spread across Italian newspapers, he received messages from hundreds of people who had also lost their smell, including a mortified pastry chef in a three-star Michelin restaurant and disheartened sommeliers.

“Reading these messages broke me in two,” Crippa said.

Like many workers in the food industry who lost their smell, he was initially reluctant to enter the spotlight. “Exposing myself as the smell-less gastronome was not pleasant,” he said, adding that, though he worried about his reputation and career, there was “a huge need to help these people.”

With both his condition and his attempts to help others now well-known, he said chefs who recognize his name when he books a table have surprised him with dedicated dishes with strong flavors in the hopes he would be able to relish something.

A distaste for blandness is what got Crippa into food in the first place.

He grew up eating plain pasta and supermarket mozzarella while his father, a carpenter, and his mother, a school principal, worked long hours and showed little interest in food. As a 7-year-old at the beach, he popped a yellow datterino tomato in his mouth, salty from the seawater, and the mix of acid, salt and sweetness, he recalled, opened up his senses to a new universe filled with flavors.

He started preparing roasts and cakes for his family. At 8, he tried 15 times — without success — to make a coconut soufflé. Instead of posters of soccer players, the walls of his room were decorated with newspaper cutouts ranking Italy’s top chefs.

At 14, Crippa met Luciano Tona, celebrated as a teacher of great chefs, who became his mentor, getting him jobs as a helper in the kitchens of acclaimed restaurants. At 22 he was the manager of the Antica Corte Pallavicina restaurant in northern Italy when it gained its first Michelin star.

After graduating in gastronomic sciences from Slow Food university, he started a career as a consultant, critic and historian of cuisine.

“I was a super taster,” he said. “It’s something you are born with.”

Until the coronavirus stripped it away.

“You sit at a table with your friends and you eat a plate of spaghetti with tomato sauce that doesn’t taste like anything,” Crippa said. “That dry, tired, flat, muffled, carton spaghetti plate becomes emotionally debilitating.”

When even a fraction of his lost senses came back in September — when for the first time in months, he caught a slight scent of coconut in his shower gel — it was so overwhelming that he sobbed.

Part of his mission is not only trying to help people recover their sense of taste but also to lend support to people going through what he did.

“When it happened to me,” he said, “I felt completely alone.” 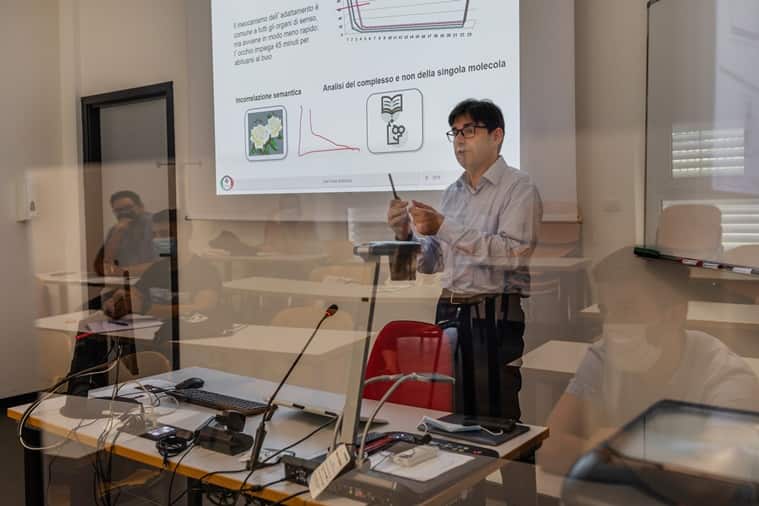 To further help those who contact him, Crippa often puts people in touch with Arianna Di Stadio, a professor of neuroscience who is experimenting with a treatment at Rome’s San Giovanni hospital that is showing good results in helping patients retrieve their sense of smell.

Di Stadio said Crippa’s gastronomic approach to the loss of smell was far from being an assurance of success. But bringing more attention to the problem, she added, could only help.

“I am a scientist,” Di Stadio said. “He has a simpler way of communicating.”

The group that had signed up for his training sessions in the sensory lab of Piacenza’s Catholic University of the Sacred Heart said that the support Crippa offered was a vital part of the experience.

“Discovering Michele I felt safer and more understood,” said Martina Madaschi, 22, a student in the workshop who lost her sense of smell a year ago after contracting the virus in Bergamo, one of the hardest-hit cities in the world. She was now struggling to smell the almond extract in an unlabeled vial placed beneath her nose.

Crippa knelt by Madaschi and asked her to remember “the taste, the texture, the smell” of the nuts. She couldn’t. But then he gave her a vial containing mint and guided her across her memories of a summer night.

“Virgin mojito,” said Madaschi, remembering the minty smell of the drink. “I would have never recognized it by myself.”

Crippa said such small moments of success boosted his commitment to helping others regain what he loves most.

“Do you have any idea,” he said, “of how much I miss Barolo tastings?”