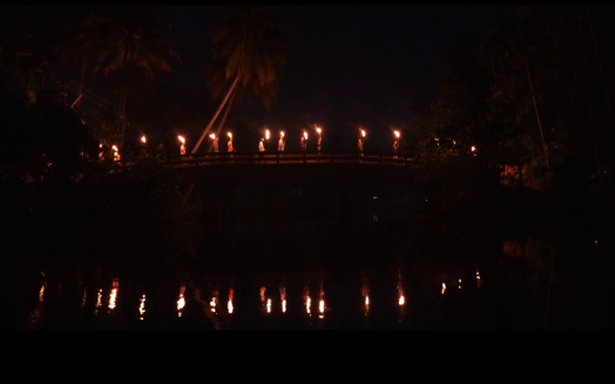 ‘The Fragments of Illusion’, an award-winning documentary on Chavittunadakam, captures the cross-cultural origins of the art form and its repertoire

As shadows lengthen on Gothuruth Island, a village 40 kilometres from Kochi, weary feet quicken. Under harsh fluorescent lights, men and women transform into Emperor Charlemagne (the first Holy Roman Emperor), Oliver, Roland, Bethesda, knights, warriors and Turks, all characters from medieval Europe; the mainstay of Chavittunadakam, an indigenous form of theatre popular among the coastal people of Kerala.

From North Kollam to Thrissur, makeshift stages come alive with Chavittunadakam (chavittu means step or stamp and natakam means play in Malayalam) enacted mainly by Latin Catholic residents-turned-actors. Clad in shiny costumes and shoes, they speak in a mixture of Tamil and Malayalam and sing songs about battles fought in faraway lands to protect the early Christians.

Charmed by a play he happened to watch, J Bibin Joseph, an engineer-turned-film director from Thiruvananthapuram made The Fragments of Illusion, a documentary on Chavittunadakam, which won the Kerala State Television Award for the best director in the non-fiction category.

“Its practitioners are fishermen, weavers, boatmen, masons and so on. It is a legacy that has been preserved by them in the face of great odds,” he says.

Without a master voice-over, the actor-singers of Chavittunadakam in Gothuruth talk about the plays and stories in the documentary. The familiarity with which they speak about incidents that are believed to have occurred in medieval Europe, is surreal.

A still from J Bibin Joseph’s award-winning documentary on Chavittunadakam, ‘The Fragments of Illusion’, which shows a scene from ‘Karalman Charitham’ | Photo Credit: Special arrangement

“Margamkali, a folk dance that bears a strong resemblance to Thiruvathirakali, and Chavittunadakam are the two popular performing art forms unique to Christians in Kerala. Chavittanadakam is anchored in Christian mythology and the Crusades. Since it is cross-cultural in origin, actors wear footwear, a feature unique to Chavittanadakam. Other indigenous art forms in Kerala shun footwear during a performance,” says Arun Surendran, producer of the documentary.

Chavittunadakam is said to have been created by Padroado missionaries who arrived with the Portuguese in 1498 in search of God, gold and glory.

A still from J Bibin Joseph’s award-winning documentary on Chavittunadakam, ‘The Fragments of Illusion’, which shows a scene from ‘Karalman Charitham’ | Photo Credit: Special arrangement

Folklorist Geetha P Wilson says there are versions in all the regions where the Padroado preached. South America, Australia, New Zealand, the Philippines and Africa have similar plays. Scholars such as Dutch ethnomusicologist Alfred A Bake (1899-1963) inferred that it is the Jesuits of the 16th Century who conceptualised these plays based on early Christian legends or stories adapted from the Bible. Characters and names might differ. The most popular is the story of Charlemagne, known as Karalman Charitham in Kerala. In most places, the Jesuits blended it with local art forms and culture,” she explains.

Chavittunadakam has elements of Western opera, Koodiyattam, Kathakali and kalaripayattu. Its dance segments are called kalasam, the name of pure dance sequences in Kathakali.

In the past, these plays were staged at night for church festivals. Some plays, like the popular and earliest, Karalman Charitham, were staged over 15 nights.

Geetha explains that there is a great deal of ambiguity about who wrote early plays such as Karalman Charitham. Some believe that the first composer, director and asan (teacher) of the early Chavittunadakam plays was Chinnathambi Annavi, a Tamil who settled in Kerala. As of now, there are no written documents about the authorship of the plays.

Over time, Chavittunadakam lost its pride of place and was restricted to a handful of troupes in Alappuzha and Kochi. In some instances, the church became uncomfortable with the revelry at night when the plays were staged.

Essayist and writer Sebeena Rafi’s authoritative work Chavittu Nadakam – Oru Charithra Padanam, (Chavittunadakam – A Historical Study), perhaps the first book on the art form, delved into the history and origin of the theatre.

Roy George, an asan (teacher) and practitioner of Chavittunadakam, recalls his father and his contemporaries putting up the plays by borrowing money and working hard to find stages. The art form received some exposure when Mammootty played a Chavittanadakam actor in Shaji N Karun’s film Kutty Srank (2009). Geetha recalls she first saw the art form in a scene from the film.

In 2012, the Government of Kerala’s inclusion of Chavittunadakam in the Kerala State Schools’ Youth Festival came as a shot in the arm for troupes. Since then, George’s kalari has students of all ages learning the unique footwork, songs and dialogues of Chavittunadakam.

A scene from a Chavittunadakam during the State School Youth Festival in Kozhikode | Photo Credit: K Ragesh

“I learnt it from my father, Georgekutty asan, at the age of 12. I played the young Geevarghese (St. George) in the play Geevarghese Charitham. Since than I have been a regular in this form of theatre. In those days, we used to sing, speak our dialogues and perform. Now, we have an orchestra. There are slight differences in footwork and rendering of music in the way it is practised towards the South,” he says.

According to Geetha, traditional percussion instruments such as the chenda and ela thalam used to be played during recitals in the past. “Now, keyboard, tabla, rhythm keypad and ela thalam are played. There is no fixed number for the musicians accompanying a play. It can differ,” she says.

Traditionally, Chavittunadakam’s footwork includes 12 distinctive steps. Georgekutty asan created two more. The footwork is vigorous and physically demanding. Geetha explains that in the past, the stage was a wooden platform constructed on top of wooden barrels: “The performers’ vigorous footwork would create a booming sound as they stepped hard on the wooden stage.”

The plays have been abridged to three hours for modern audiences, although Geetha remembers watching an act that stretched over the night for eight hours in 2018.

Roy says that efforts are on to broaden the theme of the plays to make it relevant to the age we live in and enlarge the repertoire of Chavittunadakam. “The Government’s encouragement has given us many stages; we have performed all over Kerala. New plays are in Malayalam, as it would be difficult for audiences to understand the language of older plays,” adds Roy.

The Chuvadi festival from December 26 to 31, which began at Gothuruth, had to be postponed last year because of the COVID-19 pandemic. But Roy is upbeat when he says that the play is reaching cities and is not restricted to the coastal belt, once the stamping ground of the Chavittunadakam actors.