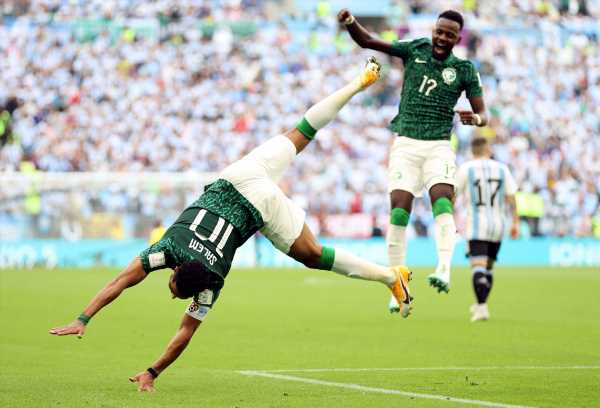 Saudi Arabia’s 2-1 victory over Argentina on Tuesday is rated the biggest shock in World Cup history by data company Nielsen Gracenote, moving ahead of the previous biggest upset, the United States’ win over England in 1950.

Using its proprietary ranking system and a complex formula that factors in team strength, location and history, Gracenote said that 51st-ranked Saudi’s chance of beating an Argentine side unbeaten in 36 internationals was 8.7%.

Some of the more famous upsets, such as North Korea beating Italy in 1966 and Cameroon beating then-holders Argentina in the opening match of 1990 did not make Gracenote’s top 10 – with both outsiders being better sides than widely considered.

Both of those went on to reach the quarter-finals as an indicator that they were better teams than thought at the time. Appearing for the first time, England were favourites to win the 1950 World Cup in Brazil while the Americans were a semi-professional squad. England, featuring future World Cup winning manager Alf Ramsey in defence, dominated but lost to Joey Gaetjens’ first-half header. It would be another 44 years before the U.S. would win another match at the World Cup. Spain arrived in South Africa as European champions and World Cup favourites and though they had 22 shots to Switzerland’s six, they lost to a second half Gelson Fernandes goal. Spain recovered from the setback well enough to go on and win the final three weeks later.

Algeria’s first ever World Cup match delivered their finest hour as Lakhdar Belloumi made the first goal and scored the winner against European powerhouse West Germany.

The result led to one of the more unsavoury episodes in World Cup history when Austria and West Germany conspired to play out a 1-0 win for the Germans that sent them both through to the second stage on goal difference at the expense of the north Africans. Germany went on to lose to Italy in the final.

After that tournament, FIFA changed the rules to make the final group games simultaneous kickoffs. A Czech team who had reached the 2004 European Championship final were expected to go deep in the World Cup and opened with a 3-0 demolition of the United States, while Ghana, making their World Cup debut, had already lost to Italy.

However, Asamoah Gyan put Ghana ahead after 70 seconds and Sulley Muntari got a late second to settle a fantastic match. Ghana went on to lose to Brazil in the second round, while the Czechs failed to qualify.

The only World Cup not to feature a final, effectively got one via this last group match, where Brazil needed only a draw on home soil to take the title.

In front of almost 200,000 fans, Brazil were leading midway through the second half but Uruguay scored twice in 13 minutes through Pepe Schiaffino and Alcides Ghiggia to secure the trophy for the second time in a game that remains famous in both nations’ history. Defending champions Germany had already lost to Mexico but it was still a massive shock to see them beaten by South Korea, who needed a two-goal victory to have any chance of progressing.

They got both goals in stoppage time through Kim Young-gwon and Son Heung-min but the other group result elsewhere eliminated them and Germany, who failed to progress from the group phase for the first time since 1938.

On the downslope from their “Magnificent Magyars” peak of 1954, Hungary were still regarded as one of the best teams in the world but after a group draw with Wales they had to negotiate this playoff against the same side.

Fully expecting to put things right in the second meeting, Hungary were shocked again as Ivor Allchurch and Terry Medwin secured the comeback win in the second half. Wales did not appear in the World Cup again until Monday’s 1-1 draw with the United States.

Host nation Spain needed a draw to finish top of the group and progress to the easier second phase group but, despite dominating the match, Gerry Armstrong scored the most famous goal in his tiny country’s history. France were world and European champions while Senegal were making their tournament debut in a match given extra spice by the fact that 21 of Senegal’s 23-man squad played for French clubs.

In another memorable opening game, Papa Bouba Diop got the only goal as Senegal started a march all the way to the quarter-finals while France finished bottom of their group.