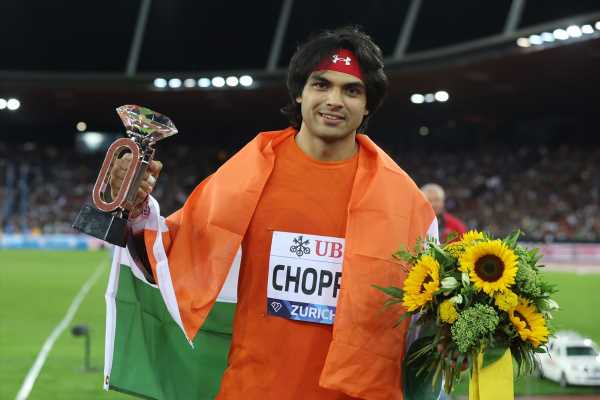 2022 proved to be a memorable year for Indian sports fans.

Neeraj Chopra claimed a historic win at the Diamond League Finals in Zurich, while the men’s badminton team created India’s badminton history by winning the Thomas Cup and Nikhat Zareen sizzled in the ring as she became only the fifth Indian boxer to be crowned world champion.

A look at the Indian athletes’ record-breaking achievements this year:

Olympic gold medallist Neeraj Chopra continued his magical run with the javelin in 2022.

After a break, Neeraj roared back in the international circuit to win a silver medal and set a national record at the Paavo Nurmi Games. He had missed the first half of 2022 in order to restore his condition following a 10-month sabbatical after the Tokyo Olympics.

Neeraj achieved yet another historic feat in September, becoming the first Indian to win a prestigious Diamond League Finals title in Zurich.

The Diamond League Finals is considered the most prestigious competition after the Olympics and World Championships.

Neeraj had made a spectacular return from a one-month injury lay-off, winning the Lausanne-leg of the Diamond League series on August 26 and qualifying for the Finals.

He became the first Indian to clinch a Diamond League meet title in Lausanne with his third career-best throw of 89.08m.

He had missed the Birmingham Commonwealth Games (July 28 to August 8) due to a minor groin injury, suffered during his silver-winning performance in the World Championships in the United States in July.

Nikhat Zareen created history as she became only the fifth Indian boxer to be crowned world champion.

She clinched the coveted gold in flyweight (52 kg) division with a facile 5-0 win over Thailand’s Jitpong Jutamas in the final of the Women’s World Championship in Istanbul in May.

Zareen had been in stellar form this year. She became the first Indian woman boxer to claim two gold medals at the prestigious Strandja Memorial in February. Despite shooting not being part of the 2022 Commonwealth Games, India’s athletes managed to claim 61 medals — including 22 golds, 16 silvers, and 23 bronze.

While weightlifters, wrestlers, boxers, badminton and table tennis players lived up to expectations to finish with medals, there were also some surprise medallists.

Lawn Bowls finally a household name in India with a superb performance at the Birmingham Games with the women’s team winning gold, while the men’s finished with a silver.

The track and field athletes also shone bright. Eldhose Paul won India’s first triple jump gold after beating fellow countryman Abdulla Aboobacker to give the country its first-ever 1-2 finish at the Commonwealth Games. Murali Sreeshankar continued India’s good showing on the track as he bagged the silver medal in the men’s long jump.

The Indian hockey teams and the women’s cricket teams also finished with medals in Birmingham.

Race walkers Priyanka Goswami and Sandeep Kumar also earned a place on the podium, but the highlight was steeplechaser Avinash Sable, who kept pace with the Kenyans to claim a silver medal in the men’s 3000m steeplechase. India’s men created badminton history, shocking 14-time champions Indonesia 3-0 in the final to win the Thomas Cup for the first time, in Bangkok, in May.

Lakshya Sen, Kidambi Srikanth and the doubles combination of Satwiksairaj Rankireddy and Chirag Shetty turned in superlative performances in their respective matches to earn the underdogs an unexpected, thumping victory.

It was a memorable triumph for India, who had previously never reached the final of the Thomas and Uber Cup in its 73-year history.

While Indonesia made the final with an unbeaten record, India lost just one match — to Chinese Taipei — in the group stage. If Indonesia disposed off mighty China and Japan in the knock-out stage, India went past five-time former champions Malaysia and 2016 winners Denmark.

In 30 Thomas Cup tournaments since 1948–1949, only five countries have won it. Indonesia is the most successful team, having won 14 times. India women ended the year in style as they clinched the inaugural FIH Women’s Nation’s Cup title with a 1-0 win over Spain in the final in Valencia earlier this month.

Towards the end of the year, the women proved that the CWG bronze was not a fluke as they continued their upward graph under Dutch coach Janneke Schopman, defeating Spain 1-0 to win the inaugural FIH Nations Cup in Valencia and qualify for 2023-24 FIH Pro League.

While the men’s team won silver, the women bagged a podium finish after 16 long years. The Indian women had won gold at the Manchester CWG in 2002 and silver at Melbourne four years later.

But the Indian men had their share of success as well. They began the year with a third-place finish in the Asia Cup in Jakarta and followed it up by winning the inaugural FIH Hockey 5s tournament in Lausanne, where they beat Poland 6-4 in the final.

In between, India also won the 10th Sultan of Johor Cup, an international men’s under–21 tournament, beating Australia 4-5 on penalties after both teams were locked 1-1 at the end of regulation time.