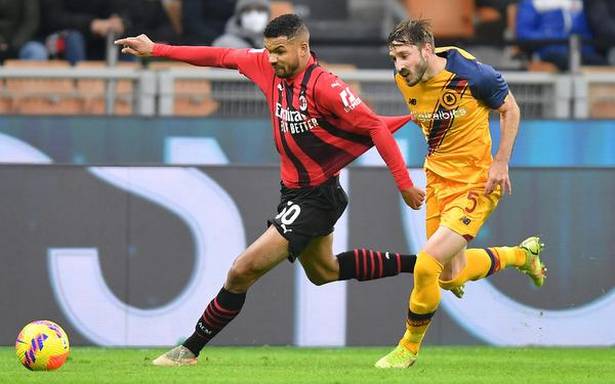 Abraham nets one for Mourinho’s side which was reduced to nine men after Karsdrop, Mancini were ejected

Jose Mourinho was left gesticulating in disapproval after two grievous errors from his Roma players handed AC Milan a 3-1 win in Serie A.

First, striker Tammy Abraham stuck out his arm to block a shot that resulted in a penalty for Milan, then defender Roger Ibanez made a terrible back pass that was intercepted by Olivier Giroud, leading to the Rossoneri’s second goal in just the 17th minute.

Giroud converted the penalty and Junior Messias scored Milan’s second on a rebound after Giroud’s effort hit the post.

Abraham then pulled one back for Roma with a deflection but Milan goalkeeper Mike Maignan maintained the team’s advantage with a series of superb saves.

Milan also hit the goalframe twice, while Roma finished with nine men when Rick Karsdorp and Gianluca Mancini each picked up their second yellow cards — which will mean they’ll be suspended for Sunday’s game against Juventus.

With Roma down to 10 men, Rafael Leao restored Milan’s two-goal advantage after being set up with a chested pass from fellow substitute Zlatan Ibrahimovic to sprint in alone toward goal. Ibrahimovic then had a penalty attempt saved by Rui Patrício. Mourinho questioned decisions by referee Daniele Chiffi and VAR official Gianluca Aureliano.

Milan moved within one point of Serie A leader Inter Milan, whose game at Bologna was among postponed after the hosts were ordered into quarantine.

The other games affected were Atalanta vs. Torino, Salernitana vs. Venezia and Fiorentina vs. Udinese.

Thursday’s matches were held on a national holiday in Italy, the Epiphany. Another full slate of 10 matches is scheduled for Sunday.

Third-place Napoli dropped five points behind Milan while Juventus, which had captain Giorgio Chiellini out positive with the coronavirus, remained fifth.