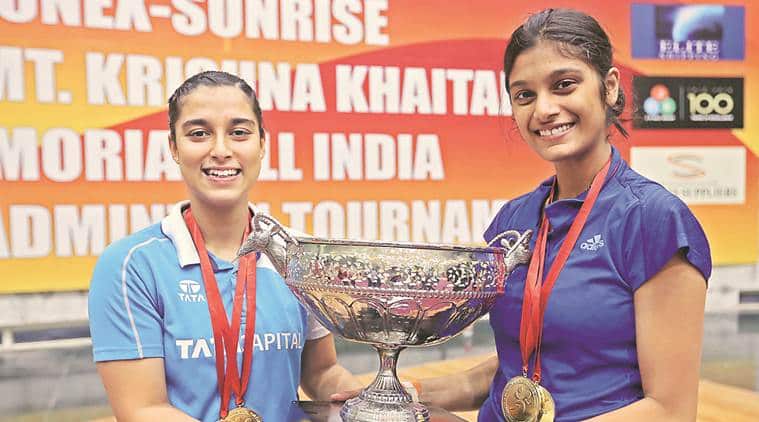 When her doubles partner 16-year-old Aditi Bhatt beat top seed Unnati Bisht in the U-19 singles final in three games, Tanisha Crasto was cheering her from the sidelines. An hour ago, Crasto had partnered with Ishaan Bhatnagar to claim the mixed doubles U-19 title

The Goa shuttler knew that she and Aditi had to take the court again to face Khushi Gupta and Drithi Yatheesh in the girls’ U-19 doubles final. With both the players featuring in three-game finals in the lead-up, they had to use all their mental toughness to carve out a 17-21, 21-19, 21-17 win to clinch the Rachel Goenka Trophy at the 28th Yonex Sunrise Smt. Krishna Khaitan Memorial All India Junior Ranking Prize Money Badminton Tournament.

“To win my first U-19 All India Ranking title is a special feeling and such performances in singles help me in doubles. Both of us played three-game matches before the doubles final and we knew that we had to come up with something special to win this title. We had to win this tournament to keep our hopes of making to World Junior Championships team alive. Hopefully we can continue our form at the All India U-19 Ranking tournament at Bengaluru,” shared Bhatt, who was also awarded with N Haridass Trophy for the best player of the tournament (Girls).

It was competing against each other that brought Bhatt and Crasto together. While Bhatt used to play with Sneha Rajwar and Crasto with Lydia Barretto, it was in 2017 that they first met when Bhatt defeated Crasto in the girls U-15 singles’ first round and Bhatt/Rajwar beat Crasto/Barretto in the sub-junior nationals at Tenali. Both decided to play together and reached the semifinals of the All India U-17 Ranking tourney in Tirupur in 2018.

While Bhatt won two U-17 titles in 2018 apart from the bronze at the Asian U-17 Championships in Myanmar, the pair also took the All India U-19 Ranking doubles title in Chandigarh before winning the junior U-19 national title in Lucknow.

“I remember the match I lost to Aditi in singles apart from losing in doubles. We had observed each other’s games in doubles and knew that we can click as a team. While we did not get time to train together, we played in doubles and reaching the final in Tirupur made us believe that we can win as a pair. Winning the national title in Lucknow was a special moment for us and we know that we have to start winning at the senior level too after winning U-19 titles,” says Crasto.

The Goa player shifted base to India from Dubai in May this year and now trains at the Gopichand Academy in Hyderabad while Bhatt trains at the Prakash Padukone Academy in Bengaluru. But they discuss tactics every day.

“We only train together when we are competing in tournaments and rarely practise for doubles when we are training in Bengaluru and Hyderabad respectively. But somehow we click as a doubles pair and that’s the most important thing for us,” adds Bhatt.

Before this week’s tournament, the pair had won the girls’ doubles title at the Bulgarian Junior International Championships where they scored a 21-15, 18-21, 21-18 win over top seeds Bengisu Ercetin and Zehra Erdfm of Turkey in the final.

Two-time national champion and coach Sayali Gokhale believes that the pair has got the right game to excel in the future. “Both of them don’t train together. But they have been winning titles consistently since last year. I think Tanisha has got a stronger sense of playing doubles as she can control the rallies well from the net while Aditi is steadier and takes control of the overall game. They complement each other well. It helps to some extent that Aditi is also winning in singles and is able to run around the court more. If they train together, they might get better,” shares Gokhale.