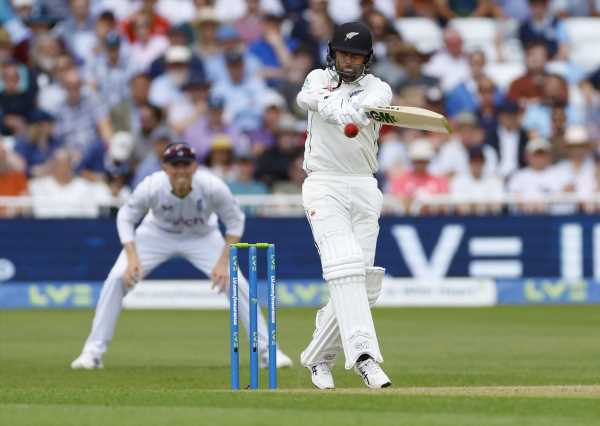 New Zealand batsman Devon Conway attributed their strong start to the second Test against England to a positive mindset which allowed them to bat more aggressively on Friday.

Smarting from their five-wicket loss in the series opener at Lord’s, where they were bundled out for 132 in the first innings, New Zealand were sitting pretty at 318-4 after the opening day’s play at Trent Bridge.

Daryl Mitchell (81) and Tom Blundell (67) will resume their bid to press for a series-levelling victory when the second day’s play begins.

The fifth-wicket partnership between them is already worth 149 runs and New Zealand would expect them to consolidate their position with a big first innings total after losing the toss and being put in to bat.

“One of the things we spoke about in our batting meetings between Tests was to try and be a bit more aggressive – have that positive mindset and intent to score,” Conway, who scored 46, told reporters.

“We were probably lacking that a bit in the first Test. We tried to control that as best as possible and are reaping the rewards after day one.”

Conway said New Zealand too would have preferred to bowl first on a pitch which wore a tinge of green but the wicket was not “as bad as it looked” for batting.

Scoring was made easier against the fuller length that the English bowlers offered, the number three batsman said.

“The English bowlers bowled quite full and that presented us with scoring opportunities.

“As batters we always try to hit the ball as straight as possible, but we just reacted to what was in front of us and that allowed us to hit square of the wicket.”