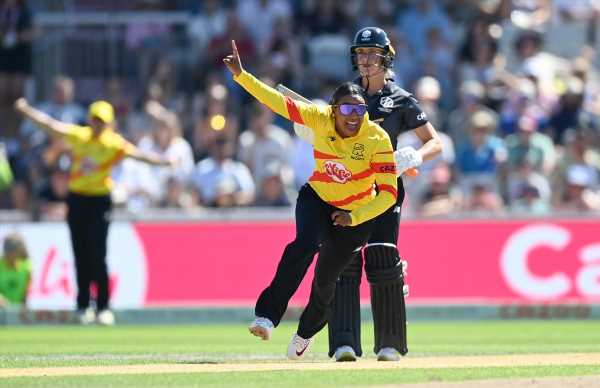 Australia’s Alana King claimed the first hat-trick in the history of women’s competition at The Hundred on Saturday, a fortnight after the feat narrowly eluded her in the Commonwealth Games in Birmingham.

The leg-spinner claimed 4-15 to fire Trent Rockets to a 43-run victory against Manchester Originals who, chasing 120 for victory, were bundled out for 76.

The 26-year-old paid tribute to her idol and deceased Australia spin great Shane Warne after her stellar debut in the 100-ball competition.

“I hope he’s looking down and pretty proud that I’ve spun a few today, it’s just a special place Old Trafford and I’m glad I could take some poles here,” said King.

She was part of the Australia team who won the gold medal when women’s Twenty20 made its debut at the Commonwealth Games in Birmingham.

In the July 31 match against Barbados, King dismissed Shakera Selman and Shamilia Connell in successive deliveries but was denied a hat-trick when captain Meg Lanning dropped Keila Elliott at slip in the next one.

“I’ll have nightmares,” Lanning said after that match. “I wanted to dig a hole and jump in it as quick as I could.”