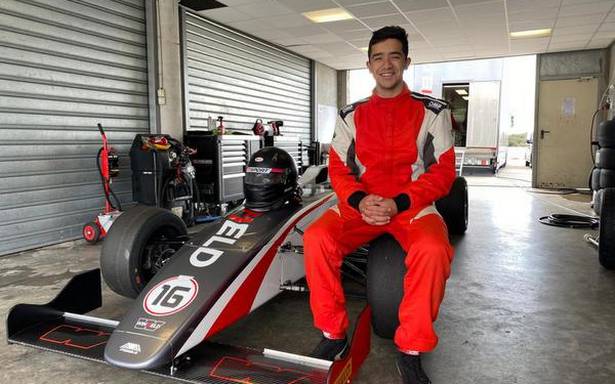 Amir Sayed has been hitting the headlines for his skilful driving in the MRF and JK Tyre National racing championships this year. He could well rest on his laurels, but he is hungry for more. The youngster from Kottayam is getting ready to battle it out with talented stars in the French Formula 4 championship next year.

Amir is the only Indian to figure in the 2022 driver line-up that includes 12 Frenchmen.

“He will race the full season that starts next April in France but prior to that, he will do the F4 winter testing at the famous Paul Ricard F1 circuit in February. He did travel to the circuit to test the Formula 4 car in April and May this year and got a bit of track time too.

Amir is clear with his plans for the New Year.

“This year has been quite eventful for us. In January, we won the JK Tyre Novice Cup and all the races in the championship. We further tested the F4 car and, as the racing season began in India, we took part in both the MRF and the JK Tyre championships,” said Amir in a chat with The Hindu.

“Heading into 2022, we focus on finishing both these championships on a high before fully preparing and committing to the French F4 season. We are looking to have quite a bit of testing and practice before the season starts so that we can be competitive from the first race as my main goal is not only to learn from the international championship, but to get on to the top step of the podium for my country!” he added.

Nibu Sayed, a former rally driver, said his son Amir has come a long way in a short while. “I am very happy with his progress. He is 100% focused and committed. My dream is for him to be successful in whatever he does. Also, I will be there to support him right through.”

Sounds good and may well make life easy for Amir on the road to France.