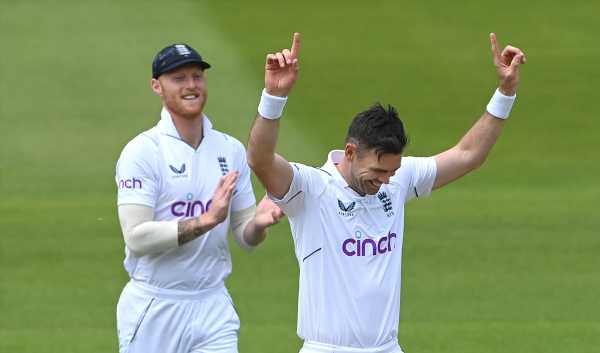 This was Anderson’s comeback Test after being dropped in the previous series against the West Indies.

With England installing a new captain in Ben Stokes who teamed up with a new head coach in Brendon McCullum, England brought back two of their most prolific wicket-takers in Test cricket — Anderson and Stuart Broad — for the three-match New Zealand series at home that got underway on Thursday.

The 39-year-old Anderson, as he has done on numerous occasions, opened the attack for England and once he delivered the first ball of the contest, the seasoned campaigner became the oldest player to do so since India’s Lala Amarnath.

Amarnath, India’s first Test centurion and their first captain after Independence, was 41 when he opened the attack for India in 1952. Anderson took 4/66 and combined with debutant pacer Matthew Potts who also took a four-fer in a sparkling first impression, to bowl out New Zealand for 132 in their first innings after the Kane Williamson-led side opted to bat first.

Anderson thrilled the spectators at Lord’s by dismissing both openers Tom Latham and Will Young for 1 run each. The Kiwi batters were caught in the slip cordon by Jonny Bairstow. Jimmy later accounted for Kyle Jamieson and Tim Southee.

Five of his first six overs were maidens.