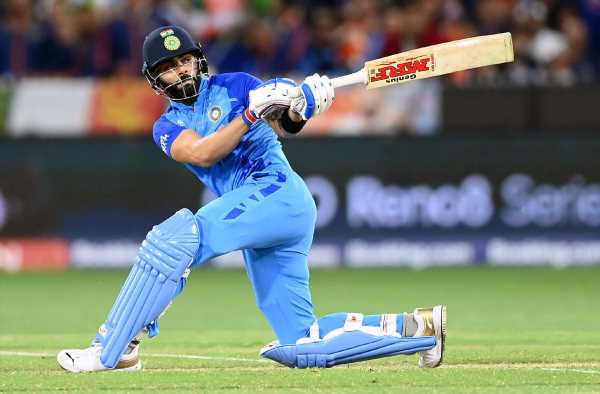 Virat Kohli is the first player to finish as the leading run-scorer in two T20 World Cups.

Virat Kohli added another feather to his already decorated hat with a unique record.

He is the first player to finish as the leading run-scorer in two T20 World Cups.

Kohli tallied 296 runs in six matches at an average of 98.66 in the T20 World Cup 2022. He scored four half-centuries in the tournament, with a best score of 82 not in the thrilling run chase against Pakistan at the Melbourne Cricket Ground (MCG) on October 23.

Kohli is the leading run-scorer across all T20 World Cups. In 27 appearances, he has scored 1,141 runs at an average of 81.50, with 14 half-centuries in the tournament.

India were knocked out in the semi-finals of the ICC T20 World Cup after they were beaten by eventual champions England.

Kohli, Suryakumar Yadav (239 runs in 6 innings with three fifties), pacer Arshdeep Singh (10 wickets) and all-rounder Hardik Pandya (128 runs with one fifty and eight wickets) were some of India’s top performers in the World Cup.