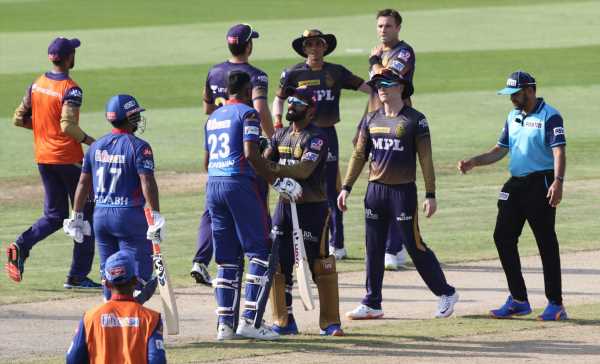 Delhi Capitals spinner Ravichandran Ashwin has said that it was totally uncalled for Eoin Morgan and Tim Southee to have given him a send-off during the side’s Indian Premier League (IPL) clash against Kolkata Knight Riders (KKR) on September 28.

Ashwin’s comments on the altercation with Morgan and Southee and “spirit of cricket” came after Delhi Capitals’ three-wicket win over Chennai Super Kings (CSK) on Monday at the Dubai International Stadium.

“Look, I think it is definitely not a personal battle or one-on-one battle. Personally, I would not deem it like that. People who want attention may be taking it that way, but I am not looking it that way at all. The incident that happened the other day was, I got really charged up because that was entirely untoward by both Tim Southee and Eoin Morgan to give the batter a send-off who just got out,” said Ashwin while replying to an ANI query during a virtual post-match press conference.

“The worst situation was that I was not aware that the ball had hit Rishabh so I just felt like that they already decided to have a go at me. That is one of the reasons I said that the words which were used were not in the right direction and not in the right space. Beyond that, we need to understand that culturally people are different, the way people are brought up to play cricket in England and India, the way one thinks is completely different,” he added.

He was referring to his Twitter posts after that game in which he asked Morgan and Tim Southee to not use “derogatory” words and lecture him on ‘Spirit of Cricket’ by taking a moral high ground.

After Ashwin’s dismissal in that match, fast bowler Southee had apparently rebuked the senior India star by saying, “That’s what happens when you cheat”. Ashwin was then seen charging towards Morgan and Southee, prompting Dinesh Karthik to intervene and douse the fire.

Further talking about the spirit of cricket, Ashwin said: “I would not say anyone is wrong here, it is just that the sort of way the game was played in the 1940s cannot be the way that you want somebody else to apply it. My two cents to this are that you want to play the game in the way you want to, but do not expect that if it is not within the laws of the game and have a go at them for unnecessary reasons.”