Aubameyang, who hadn’t scored in the league since Dec. 16, broke the deadlock in the 50th minute before Bukayo Saka added a second with style in the 61st. An unmarked Aubameyang got his second goal in the 77th. 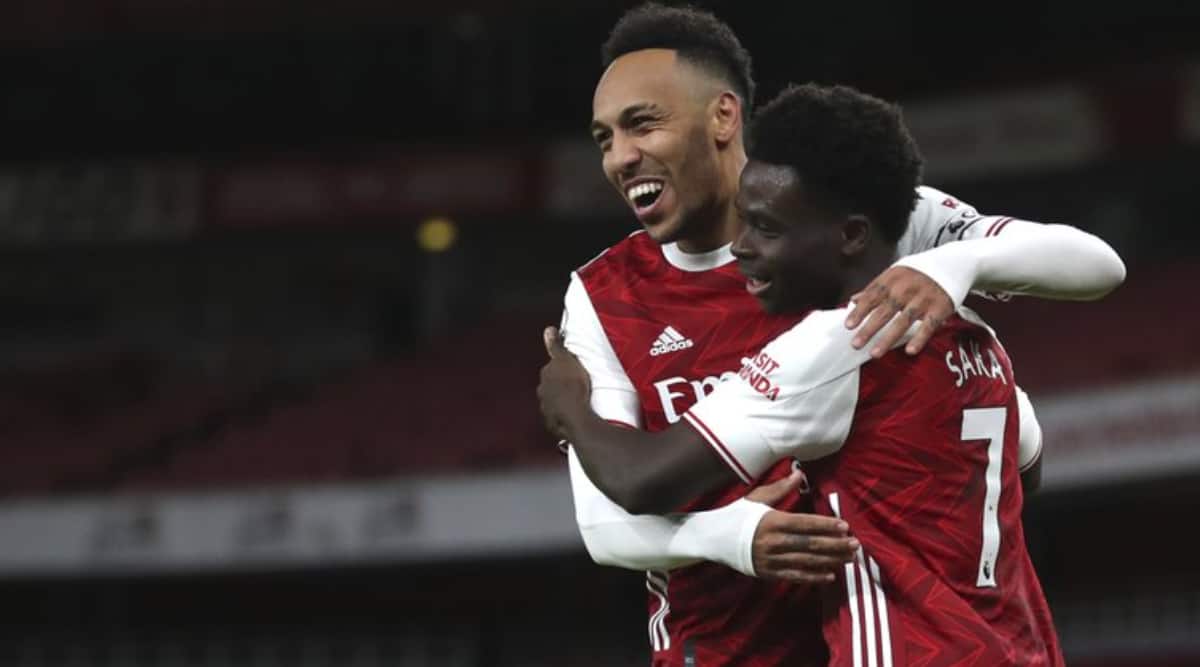 Arsenal captain Pierre-Emerick Aubameyang finally ended his scoring drought in the Premier League with two second-half goals in a 3-0 win against Newcastle on Monday as the Gunners try to claw their way out of mid-table.

Aubameyang, who hadn’t scored in the league since Dec. 16, broke the deadlock in the 50th minute before Bukayo Saka added a second with style in the 61st. An unmarked Aubameyang got his second goal in the 77th.

It was a fifth consecutive clean sheet in all competitions for Arsenal and a fourth win in five league matches.

“We’re all coming together as a group,” attacking midfielder Emile Smith Rowe said. “We’ve had some meetings off the pitch. The whole group is so much stronger and it showed on the pitch.”

“The spirit is better,” he said. “We have to maintain that run.”

But the Gunners only moved up a place to 10th with 27 points, as they try to turn around their season after a woeful start.

Newcastle remained in 15th place, only seven points from the relegation zone.

“There’s no denying that confidence is low,” manager Steve Bruce said. “We have to keep plugging away at it.”

Aubameyang, who had just three league goals this season coming into the game, seemed like he would continue his poor run of form after missing a string of chances in the first half.

But a perfectly weighted long ball from midfielder Thomas Partey found the struggling forward on the left, leaving him one-on-one with defender Emil Krafth.

The Arsenal captain cut inside and struck the ball past goalkeeper Karl Darlow, beating him at the near post. Aubameyang did his trademark front flip in celebration.

Then, it was the time for Arsenal’s youngsters to shine. The 20-year-old Smith Rowe took the ball down the left before cutting in and setting up an unmarked Saka, 19, who drifted in to near the penalty spot before finishing with a simple tap-in.

The two players have come up through the academy together and their linkup play is paying dividends for Arsenal as Arteta is starting to rely on them and other youngsters in the squad.

“We’ve all played together from a young age,” Smith Rowe said. “It’s a dream for us.”

But he’s also learning from a veteran player: Alexandre Lacazette.

“He gives me so much confidence,” Smith Rowe said. “As we link up and play together, he talks to me.”

Arteta was certainly impressed by his young players.

“They put a smile on my face,” he said. “They are developing really well. The performances they are putting in are extraordinary.”

Arteta was also happy to have Partey back for his first start since Dec. 6 against Tottenham after recovering from a thigh injury, saying he hopes the player can help Arsenal more with the transition from defense to attack.

“He has this presence, this aura, which makes him a special player for us,” Arteta said. “Hopefully, we can keep him fit.”

Aubameyang’s second goal came when Cedric Soares took the ball to the byline before looking up and finding his unmarked captain, who side-footed home. A video review confirmed the ball was kept in play by Soares.

Aubameyang didn’t have a chance to score a hat trick, as he was substituted two minutes later with a stomach issue.

One of the few Newcastle counterattacks came in the 24th, when winger Miguel Almiron beat Partey’s sliding tackle to intercept the ball and break unmarked down the right. The Paraguayan cut in and exchanged passes with Andy Carroll before firing the ball over the bar.

The visitors made eight changes after a 1-0 loss to Sheffield United, with Bruce fielding a more attacking lineup as Newcastle tries to steer clear of the relegation zone. The manager is under increasing pressure, but he stressed that he’s the man to see them through this tough patch.

“I’m never going to shy away from it,” Bruce said.

But the Magpies are still missing one of their main attacking threats, winger Allan Saint-Maximin, who has been sidelined for the past seven weeks with a severe case of COVID-19. He only recently started training again.

“The one person who could give us a bit of creativity and the sparkle in the team is Allan of course,” Bruce said. “He’s huge to us. He’s back in light training. We have to be careful with him and see how is he.”