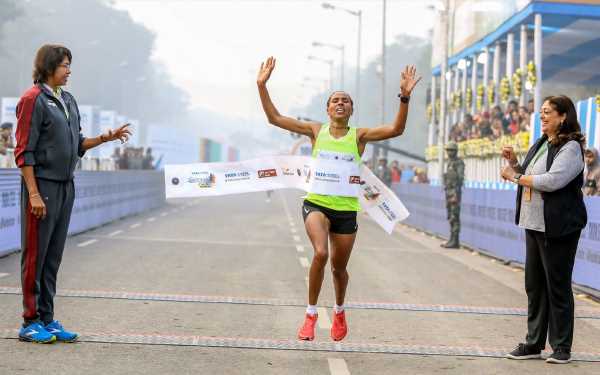 In the mix right from the beginning, but not in the lead pack, Barsoton was behind Alfred Ngeno, Abdisa Tola and Berhanu Legese. He picked up pace after the 20 km mark and never looked back.

“I know the course and I knew exactly when to pick up the pace. I started picking up the pace from 20.06 kms. The last stretch is flat,” said Barsoton, who will take home a US$ 7500 winner’s cheque along with an event record bonus of $3000.

“I had been preparing for the last two months. I had some niggles but despite that, I am happy to have won here and with a course record. It was a very competitive race and the others in the field gave me a tough fight,” Barsoton added.

Meanwhile, in the women’s elite category Bahrain’s Desi Jisa shaved off almost a minute from the course record set by Ethiopian Guteni Shone to clinch the race. She finished in 1:21:04 to eclipse the previous mark of 1:22:09 set two years back.

“I thank Kolkata for such a warm welcome. I wanted to win the race and I’m thrilled to have done it with a course record. Now my target will be to participate in Paris (2024 Olympics), a dream for all. The atmosphere is really good here and the course is nice and flat. I loved running here,” said Jisa, who finished runner-up in 2019.

The elite Indian men’s crown was won by Amethi-born Abhishek Pal, who took home the winner’s purse of Rs 2,75,000. The Indian Railways employee was in red hot form as he stole the show with a timing of 1:17:52.

“Till the 20 km mark we were neck and neck, but after that, I picked up the pace. Last time I failed to win here, so I was determined. I had trained well and was in good form. I am very happy that I won here. I will head to Bengaluru from here and train for the next season, with the Asian Games due next year,” Pal said. In the Indian women’s elite category Sanjivani Baburao Jadhav signed off a highly successful year on a high and Rs 2,75,000 richer. She has won the Indian women’s category of the World’s prestigious Vedanta Delhi Half Marathon and the 10,000m gold at the Federation Cup Senior Athletics Championship. She stood on the winner’s podium here with the timing of 1:34:23.

After the race, she said: “I am very happy to have won. I wanted to keep the winning momentum going. I wanted to maintain the tempo, remain in the mix, and set the pace in the end. The weather was very good and added to my strength. My next target is Asian Games followed by the Olympics.”

The participants drew inspiration from gold-winning Olympian and Event Ambassador Abhinav Bindra who was present to witness the races from the grandstand. Meanwhile, Women cricket icon and former Indian skipper Jhulan Goswami and reigning queen of Tollywood Subhashree Chakraborty, both faces of the event, were at the start line cheering all the participants, especially those taking part in the Ananda Run, the soul of the event and a celebration of the spirit of Bengal.