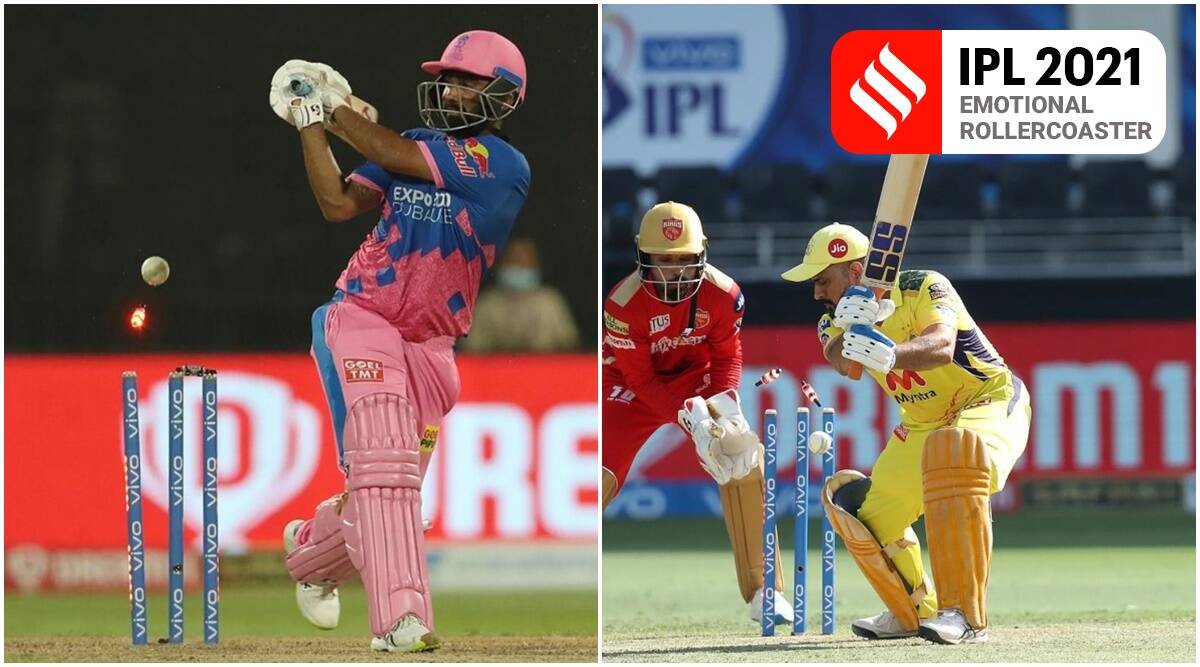 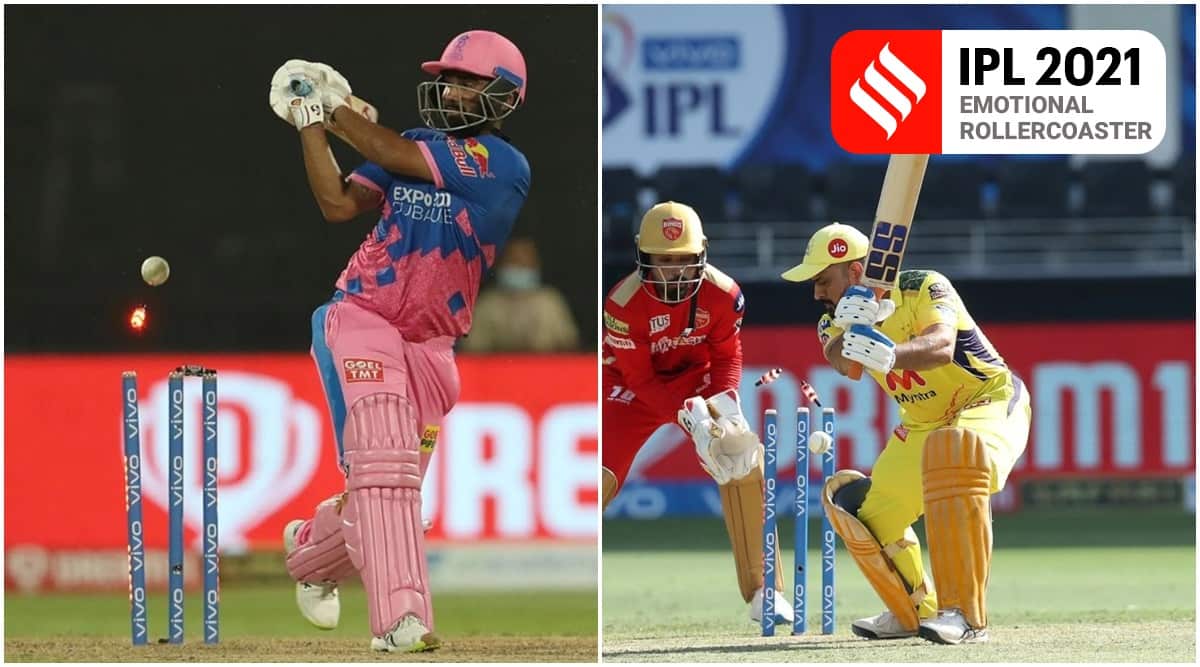 Rahul runs out of luck

Rahul Tewatia tried everything literally in what had looked a losing cause from pretty early on as the Rajasthan batting didnt even take off. There was no respectability in their lowest total of the season, but Tewatia still managed half of the wretched total of 85 they cobbled up in between a steady stream of wickets. Shambles around him like that reflected in his own exit and the one he triggered before that. The ill placed, ill timed top edge trying to slog was pick-and-offloaded pretty quick and accurately by Shakib even as Sakariya and Tewatia bumbled to a doomed second run. DK was quick on the pick up and a thoroughly muddled season for Rajasthan amidst entertaining solos found its culmination in the run out – an epitome of the campaign this year. This time they were not even close to winning, let alone botching it in the end. A bottom edge on 44 would drag the ball onto his stumps, giving bowler Shivam Mavi his high point of the season.

Not pulling a fast one

And the word spreads in the fast-bowling world. For the second successive time Ruturaj Gaikwad has fallen to the bouncer, top-edging a pull. Last time around it was the pacy Anrich Nortje and this time it was the left-arm seamer Arshdeep Singh who bounced it right across Gaikwad, triggering two errors. First, the attempt to fetch it from outside off and dragging it to the on side, and second in the process the bat face turning towards the sky- much like Suresh Raina’s pulls. Of course, Gaikwad has pulled marvellously in the past to deliveries around chest high but in the last two games the ball has bounced higher and he has succumbed to mistimed pulls. Even in the first over, he was surprised by a Mohammad Shami bouncer; he had tried taking a step down the track and Shami let it rip, and the ball rammed into the gloves and popped behind the stumps on the leg side. Going by the way he has played so far, one can assume that he will course-correct but for the rest of the IPL, the fast bowlers will have a go at him early on.

It was a cat-and-mouse game for a while between Ravi Bishnoi, who specialises in googlies, and MS Dhoni. Perhaps, he was a touch wary about Dhoni charging him or wanted to bowl it away from him to induce an error, some of his early deliveries were well outside off and rather full. And Dhoni was up to that task, slicing and blasting a four. Whenever the ball was on the stumps, Dhoni paid respect. It wasn’t soon that Bishnoi caught on to it and bowled a lovely googly turning in from outside off on a length that wasn’t too full. Dhoni stretched on the front foot and his bat-lift suggested he wanted to belt it but that length and the break-in made him change his mind. He opted for an awkward stab but the ball squeezed in through the bat-and-pad gap to peg back the stumps. Dhoni had laboured along in the last game and was only fluent against full deliveries in this game. Whenever the ball hasn’t been on a driveable length, he has searched around for the ball.

No modern-day batsman perhaps has played as many one-handed lofted hits as Dwayne Bravo. There was one in the final over bowled by Mohammed Shami. It was a full toss and Bravo sliced it one handed, the bottom hand coming off the handle, to the cover boundary. Usually, it’s the length ball that he mangles like that. He would lean forward to drive and in an effort to send it up and over extra cover, he would go solo with the top hand. Bravo’s aerial hit over extra cover is as pretty a sight as we have seen in the last couple of decades. Rohit Sharma owns the lofted straight hit to seamers but Bravo sits on the throne of the king of beautiful off-drives.

KL Rahul had just taken off his helmet after top edging an attempted pull and looked a bit out of sorts. Ambati Rayudu walked up to him and touched a bruise on the forehead, just in case Rahul wasn’t aware of the place of pain perhaps. It was all friendly out there. Not like the time Jeff Thomson walked up to Chetan Chauhan and put a cross on the forehead on the helmet, telling him that nasty bouncers were coming. Chauhan had laughed after top-edging a pull to the boundary (his laughter was an in-context joke for his guffawing team-mates at the balcony) but Thommo took it as an umbrage and warned him. Sunil Gavaskar narrated the story on these pages after the unfortunate demise of Chauhan. “Thommo thought it was a mocking laugh and went, “What the f*** is funny about that shot?” He went across, marked a cross on Chetan’s forehead and said, “that’s where I am going to hit you. Let’s see if you can still laugh after that.” As Thommo continued to glare and spray words, Chetan told him, “I am a Rajput, you do what you have to do, you go bowl.”

“And I am telling him in Marathi, “Masterr, he doesn’t know what Rajput means! Let it go, don’t lose your concentration.”

Poor Sarfraz Khan. Two ducks in a row, now. He had got a beauty in the last game, with Yuzvendra Chahal’s ripping leg break proving too much for the man known for his cheeky shots on and off the field. He had poked at it, and lost his off stump, triggering passionate celebrations from his former IPL captain Virat Kohli. This time around, he fell to another lame poke. It was a scrambled-seam delivery from Shardul Thakur and Khan tried to hurdle it from around off stump to the on-side and the leading edge took it towards mid-off. Standing there was Faf du Plessis who loves to fall while taking catches and he went down to the ground again for this dolly. He got up sheepishly and pointed towards something in the horizon that made him lose sight of the ball, perhaps. Be that as it may, he has spoken in the past on how he likes to fall to the ground while taking aerial catches as he feels it gives him better control over the ball. When Faf falls, he rises with a catch, usually.