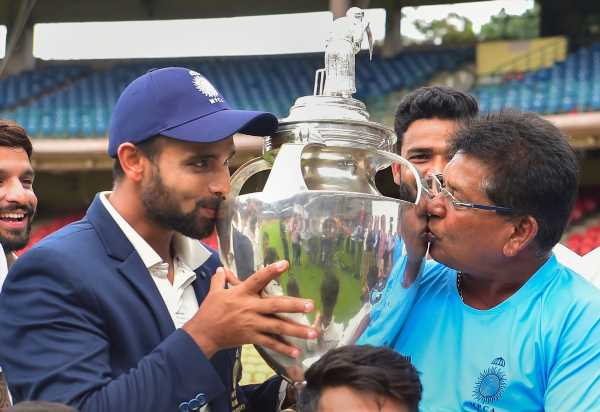 ‘The IPL is like a corporate world, the owners expect results and on top of that you don’t get that much time.’
‘Coaching is not that important at that level, it is more about man management and keeping the atmosphere really good, that is the most important thing.’

Kolkata Knight Riders surprised many when they appointed Chandrakant Pandit as head coach. A franchise which in the past preferred only high-profile foreigners as head coach including most recently Brendon McCullum, Jacques Kallis before Baz, Trevor Bayliss, Dav Whatmore and John Buchanan, took a step in the opposite direction picking Pandit as its first Indian head coach — a man renowned for his success only on the domestic circuit.

Two-time champions KKR have not won the IPL title in the last eight seasons and will be hoping that Pandit, whose midas touch has seen him turn underdogs Vidarbha and Madhya Pradesh into Ranji Trophy champions, can bring them back to winning ways.

While Pandit’s record as coach in domestic cricket is unmatched, a high-profile international tournament like the IPL could prove a completely different challenge for the former Mumbai player, who is known to be a strict disciplinarian and tough taskmaster in the dressing room.

Former India opener Wasim Jaffer, who shares a close bond with Pandit and has won four Ranji titles under his tutelage — two each at Mumbai and Vidarbha — believes ‘Chandu’ — as he is known to his peers — is the right man for the job as he likes to win at all costs.

Usually foreign coaches are preferred in the IPL, very few Indians have got the chance. So is it a welcome change to see someone like Chandrakant Pandit who has succeeded at the domestic level as coach get a rare chance?

I think it is a very good change. I believe this should have happened long back. Now everyone knows that Chandrakant Pandit has that kind of track record, that is the reason why he was picked.

I feel it is a good thing, because Indian coaches have done well. We have seen Sanjay Bangar doing well, we have seen Ashish Nehra win the IPL as the head coach, even Anil Kumble (the current Punjab Kings head coach) was with Mumbai Indians before.

It is a good thing. It is a good sign for the Indian coaches and I hope he does well for KKR

What makes Pandit so successful as a coach and how would you describe his style of coaching?

Everyone knows he is a very strict taskmaster, he is very old school. He likes discipline, which is going to be very unlike in the IPL.

In first class cricket, you get a lot of time as the coach because you work from April-May, in the off-season but that doesn’t happen in the IPL. You get only a 15-20 day camp and the foreigners only come for 7-10 days (ahead of the start of the IPL, so you don’t get much time to work with them so that is the drawback.

But I think he will adjust to all that. He is somebody who has been in the circuit, he has worked with international players. Even in the domestic teams, while coaching Mumbai he had international stars, while in Vidarbha he had Umesh Yadav, in MP he had Avesh Khan and Venkatesh Iyer.

So it is not like he won’t be able to handle the international players. He will obviously adjust to that.

Pandit has got the midas touch. He is somebody who has tasted success and knows how to win tournaments. It is up to him to build the team and bring that winning culture, and I think he will do that.

I hope he does that from an Indian coach’s perspective I really want to see Indian coaches do well.

How different or difficult is it coaching an IPL team?

It is very difficult, like I said. It is a very, very, big change from domestic cricket, the pressure is different.

The IPL is like a corporate world, the owners expect results and on top of that you don’t get that much time.

I feel coaching is not that important at that level, it is more about man management and keeping the atmosphere really good, that is the most important thing.

You should be able to put your message across about the role clarity of every player.

Like I said, you get only 15-20 days, you can’t do too much coaching in that period. So coaching is not that important, the man management part is the key and maintaining a good atmosphere in the squad.

Role clarity is also another important aspect, planning as to which player will play which role.

The captain should know his role and so must other players in the squad be clear about their role.

If you do that very early in the tournament, you got a very good chance to do well.

You have must have received a lot of guidance from Pandit in your playing days when you turned out for Mumbai and then for Vidarbha.
This is a rare chance for you when you can actually guide Pandit, having already done some coaching in the IPL with Punjab Kings as the batting coach.
What would your advice be for him?

I don’t think I can give him any advice to be honest. I have only done a couple of years. These are two different things.

I was the batting coach (of the Punjab Kings) and Pandit is the head coach. I was not the decision maker in the team, I used to only deal with the batters. We had Anil Kumble, who was the head coach and he was taking all the decisions.

Chandrakant Pandit will have a similar role, he will have to take the most important decisions and I think he will do that.

We all know how he operates, he takes those strong decisions keeping the team in mind.

But like I said, managing those big players, for example someone like Andre Russell or maybe Shreyas Iyer, that will be very important and I am sure he will be able to do that.

Winning is the most important thing for him and he will do anything for it.

Does Pandit’s appointment pave the way or motivate the other coaches in India, especially those who have been coaching only in domestic cricket?

All the Indian coaches are getting opportunities in the IPL and them doing well is a good sign for Indian coaching.

We have got really good coaches in India and if they get an opportunity at that level, I am sure they will do well because of most of the players in the IPL squads are Indian, so you need to understand the Indian mentality more. The foreign players anyways know what they have to do.

More often than not, you need to understand the Indian players, especially the uncapped ones, and who better than Indian coaches for it? So, this is a step in the right direction.

KKR has also done well by taking this decision early to appoint Pandit as coach, giving him ample time to prepare and work on the team ahead of the IPL next year.

It is a good decision because Brendon McCullum had gone anyways, so they had to appoint somebody very soon. They have taken a good decision by apponting Pandit right now, as it gives them a lot of time to work on the next season.

Does he also deserve to be given a chance as the India coach too someday in the future?

I don’t know, maybe his age is a factor. He is more than 60, so that will be a challenge.

Let’s hope he does well in the IPL and not think too far ahead. First things first.

Let’s hope he is successful in the IPL and then we can take it from there. You don’t want to jump to conclusions too early.