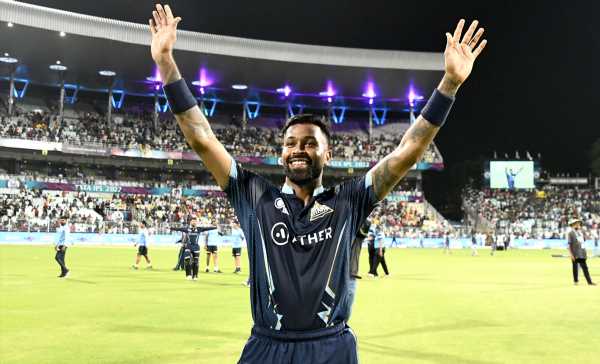 Tendulkar made it clear that the selection has nothing to do with the reputation or past performances of any players and are strictly based on the show put up by them this season.

“Hardik was the standout captain this season. He was clear in his mind, proactive,” he said in the YouTube video.

Pandya clinched the title for his team Gujarat Titans in their debut season. He led the entire unit from the front, scoring 487 runs in 15 games at an average of 44.27 with four half-centuries, while picking up 10 wickets. IPL’s highest run-getter Jos Buttler is the opener of the team along with veteran Shikhar Dhawan.

“What a season he has had. Fabulous. I cannot see any player more dangerous than him in this IPL. There are a couple but when Buttler gets going, not many can catch up,” Tendulkar said of England’s Buttler, who scored 863 runs in 17 games at an average of 57.53, with four centuries and four half-centuries.

Punjab Kings’ opener Dhawan also enjoyed a good run with the bat, with 460 runs at an average of 38.33.

Tendulkar drafted Lucknow Super Giants captain KL Rahul at No 3 even though he scored 616 runs in 16 games at an average of 51.33 and two centuries and four fifties as an opener in IPL 2022.

“He is a player who can pick singles and when he wants to hit sixes he has the ability to do that as well,” reasoned Tendulkar.

Pandya was picked as the captain, while Gujarat Titans’ finisher David Miller also made the cut courtesy of his superb displays with the bat in tight run chases along Punjab Kings’ big-hitter Liam Livingstone.

“He (Miller) showed tremendous form, very good consistency and played some crucial knocks. What I observed this season was that he was able to hit towards all sides of the ground. It was proper cricketing shots and it was a treat to watch,” said Tendulkar. About Livingstone, the attacking English batter who set the league on fire with his towering hits, Tendulkar said, “Livingstone has the ability to hit sixes, dangerous player. He is very clear in his mind and backs himself. At number 6 that is a good position. His bowling will also come handy, I would ask him to bowl off-spin more often.”

Dinesh Karthik got the nod as the wicketkeeper-batter following his good showing with both bat and gloves with 330 runs in 16 games at an average of 55.00..

“When a batter is calm and has the ability to play 360, he is dangerous and that is exactly what Dinesh Karthik did this season. He is an obvious choice for me,” said Tendulkar.