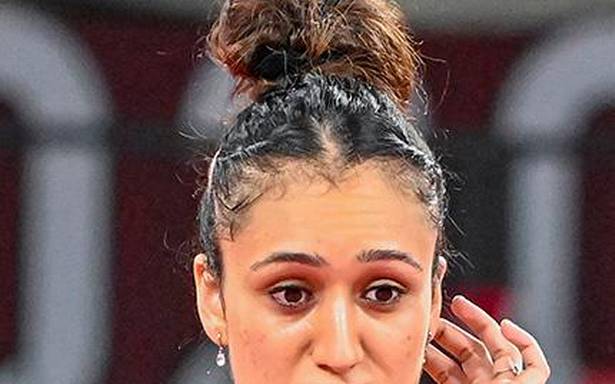 Denying the charges levelled against her by the Table Tennis Federation of India (TTFI) after refusing to let National coach Soumyadeep Roy advise her during her singles matches at the Tokyo Olympics, ace paddler Manika Batra has alleged that the coach was involved in match-fixing.

Manika’s five-page response, accessed by The Hindu, was sent to the TTFI on August 26, a day before the seven-day deadline the TTFI had set while issuing the notice on August 20. She has accused Soumyadeep of pressurising her into conceding the Olympic qualification match to his personal ward (Sutirtha Mukherjee) in Doha in March.

“I have been falsely charged with ‘bringing disrepute to the country by the sight of an empty chair of the coach’. But the truth is that the ‘empty chair’ was the result of the National coach’s pressure tactics for match-fixing and TTFI’s inaction to act on my prompt reporting of that incident and not the result of my so-called ‘indiscipline,’’’ Manika wrote in her reply to the show-cause notice served by the TTFI.

“It is such pressure tactics, inaction and the consequent sub-optimal performance of a player that would have actually brought disrepute to the country,” she further wrote.

“Contrary to false propaganda, it was not at all a show of disrespect or displeasure by me. I had to take that decision as I did not wish to lose in the lower rounds by buckling under unethical pressure. I decided to fight bravely for my beloved country and reach the higher rounds,” Manika stated in the reply.

“I have neither brought any disrepute to the TTFI and my country nor have I undermined anyone’s appointment. I am being unfairly targeted despite the fact that I have always worked hard, stuck to the ethos and ethics of sports, and tried to give my best to my country and bring laurels to the TTFI.”

TTFI secretary general Arun Kumar Banerjee told The Hindu that it has asked Soumyadeep for his response. “We have asked Soumyadeep to submit his reply to the allegations. The issue will be discussed at the next TTFI executive committee meeting that will be convened at the earliest,” Banerjee said.