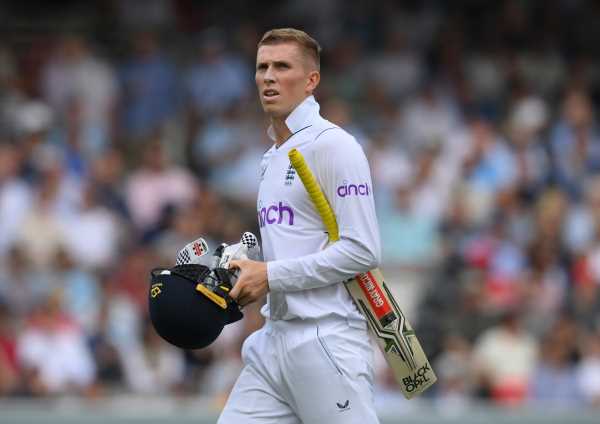 England opener Zak Crawley’s run drought shows no signs of abating and his failure in the opening Test against South Africa appears to have made his position in the side untenable.

The 24-year-old managed scores of 9 and 13 at Lord’s, where South Africa triumphed by an innings and 12 runs inside three days to grab a 1-0 lead in the three-match series.

Crawley is now without a half-century in his last 14 innings and his unflattering Test average of 26 has prompted questions about his place in the squad.

“The problem Zak Crawley has is that we haven’t had the upside to go with the downside,” former England captain Andrew Strauss told Sky Sports.

“It feels like his game is a bit skewed at the moment.

“He doesn’t understand the high-risk from the low-risk options. From what we have seen, he is not at ease with his game or his place in the team either.”

Although he is known for lavish stroke-play, consistency has not been Crawley’s forte, but the team management appeared fine with that.

“We don’t necessarily look for consistency with Zak,” assistant coach Paul Collingwood had said, defending the opener’s selection for the match.

“It’s about match-winning performances and being able to do special things.”

Strauss said a top order batsman must be good at adapting to conditions.

“We haven’t seen enough of that – the learning, the adapting his game, the smart decision-making,” Strauss, a former opener himself, said.

“If you have not got that, you are not going to last in international cricket. There is too much analysis and too many smart bowlers who will work you over very quickly.”

South Africa did precisely that at Lord’s, exploiting the opener’s well-known vulnerability against left-arm spin.

In England’s second innings, touring captain Dean Elgar introduced Keshav Maharaj as early as in the eighth over. The left-arm spinner trapped Crawley lbw with his third delivery.

The second Test begins at Old Trafford in Manchester on Thursday.