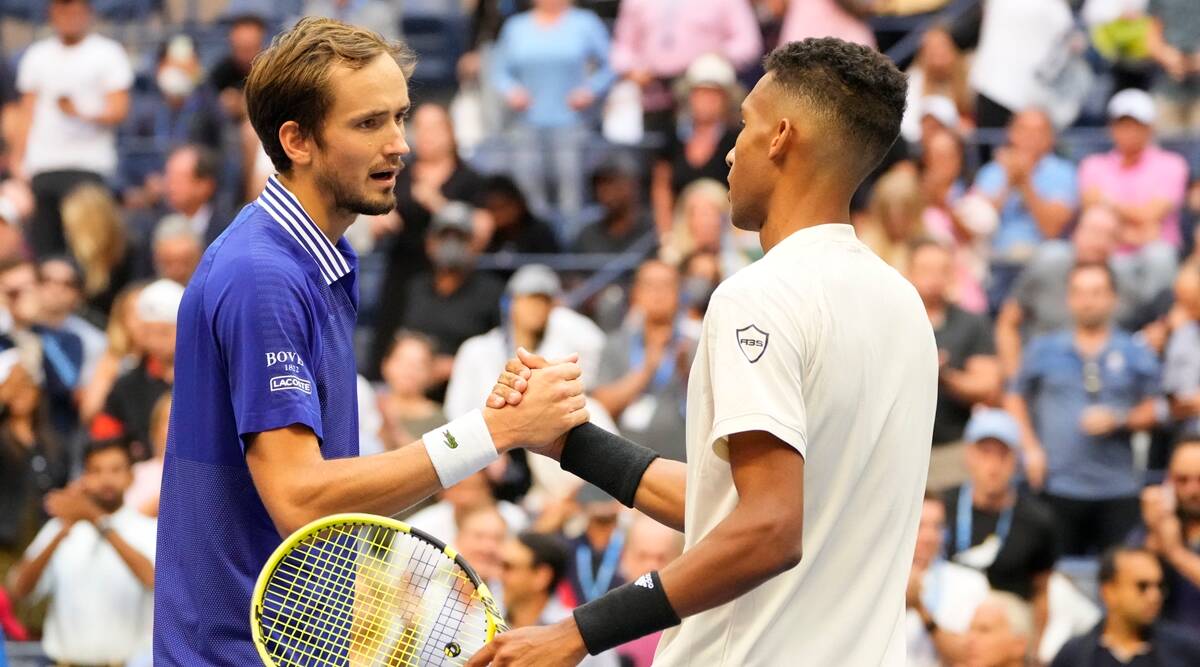 Daniil Medvedev, who is seeded second at the US Open, defeated a mistake-prone Auger-Aliassime 6-4, 7-5, 6-2 at the Arthur Ashe Stadium to head to his third Grand Slam final. Daniil Medvedev twice was a point from finding himself tied at a set apiece in his U.S. Open semifinal against Felix Auger-Aliassime.

The No. 2-seeded Medvedev surged out of that tight spot, beat a mistake-prone Auger-Aliassime 6-4, 7-5, 6-2 on Friday and now is headed to his third Grand Slam final.

“A strange match, a little bit, in the second set, where I think everybody felt like it’s going to be one-set-all, and you never know where the match is going to go,” said Medvedev, who trailed 5-2 in the second. “Managed to save the set points. He missed one volley; I made one good point. And the match turned around completely.”

All in all, this encounter amounted to an opening act ahead of the headliner: No. 1 Novak Djokovic against No. 4 Alexander Zverev in the second semifinal Friday night.

That, Medvedev told the crowd, figured to be “a great match, so I advise everybody to see it.” He planned to watch it himself after having some dinner delivered.

Djokovic began the day 26-0 at major tournaments in 2021, with titles at the Australian Open, French Open and Wimbledon, and his sights on becoming the first man since Rod Laver in 1969 to complete a calendar-year Grand Slam. Laver was seated in the President’s Box at Arthur Ashe Stadium for Friday’s matches.

Medvedev, a 25-year-old from Russia, was the runner-up to Djokovic at Melbourne Park in February and to Rafael Nadal at Flushing Meadows in 2019. This was Medvedev’s third consecutive trip to the U.S. Open semifinals.

“I don’t think I played my best today,” said Medvedev, who has only dropped one set so far through six matches over the past two weeks, “but I’m really happy to be in the final.”

The 12th-seeded Auger-Aliassime is a 21-year-old from Canada who is coached by Nadal’s uncle, Toni, and was appearing in a major semifinal for the first time.

Maybe the newness of it all affected him. Surely, Medvedev’s play did, too.

Auger-Aliassime finished with 39 unforced errors — including 10 double-faults, three in the opening game alone — and just 17 winners.

Auger-Aliassime finally earned a break point more than an hour in, and a double-fault by Medvedev handed over a 4-2 lead, which quickly became 5-2. But when Auger-Aliassime served for that set at 5-3, he couldn’t get over the line, even after going up 30-love and 40-30.

“The only thing I was thinking: ‘Don’t make an ace on the line, please, and I’m going to make you play,’” Medvedev said afterward.

Twice, Auger-Aliassime held a set point. Twice, he did not come through, most disconcerting when he missed what should have been a routine forehand volley, slapping it into the net. A bad backhand ultimately gave away that game.

Then, in the next game, Medevev said this is what was on his mind: “I have to just do everything at my best, even more than before, because that’s the moment where I could break him mentally. And that’s what happened.”

More mistakes — among them, a double-fault — contributed to Auger-Aliassime getting broken at love to trail 6-5. Medvedev then held to cap a five-game run and claim a two-set lead.

Medvedev and Zverev both are in search of a first Grand Slam title. Djokovic, meanwhile, was trying to win a 21st overall title from the sport’s four most important tournaments, which would break the men’s career mark she shares with Nadal and Roger Federer.

Zverev went into Friday on a 16-match winning streak, including a victory over Djokovic in the Tokyo Olympics semifinals on July 30 along the way to the gold medal. That was a best-of-three-sets match; in New York, the format is best-of-five for men.

The U.S. Open women’s final is Saturday, with about as unlikely a matchup as there’s ever been with a Grand Slam title on the line: 18-year-old qualifier Emma Raducanu of Britain vs. 19-year-old Leylah Fernandez of Canada.

Raducanu is ranked 150th, is playing in only her second major tournament and is the first player to go through qualifying and make it all the way to a title match. She hasn’t dropped a set yet.

Fernandez is ranked 73rd, is in her seventh Slam appearance and is coming off three-set victories over four seeded opponents in a row: No. 3 Naomi Osaka, who won the U.S. Open in 2018 and last year; No. 16 Angelique Kerber, who won it in 2016; No. 5 Elina Svitolina and No. 2 Aryna Sabalenka.

It is the first Grand Slam final between two teenagers since the 1999 U.S. Open, when Serena Williams, 17, won the first of her 23 major championships by defeating Martina Hingis, 18.