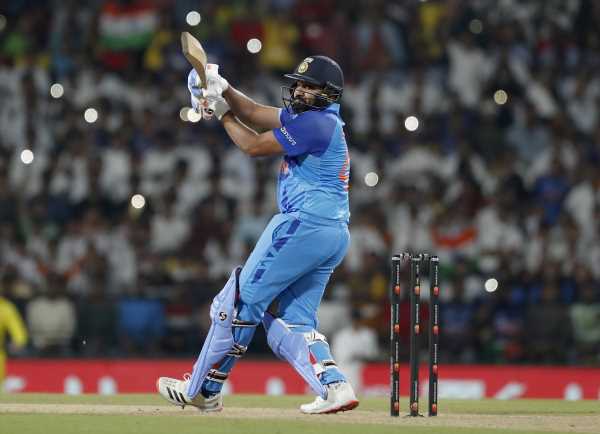 Rohit Sharma’s unbeaten 46 of 20 balls helped India chase a massive 91-run target to level the series 1-1 in the second T20I in Nagpur here at the Vidarbha Cricket Association (VCA) Stadium in Nagpur which was impacted by rain.

Chasing a mammoth 91-run target, India needed a flying start as skipper Rohit Sharma led from the front to take the attack to the opposition scoring 20 runs in the opening over. He hit two sixes and his fellow opener KL Rahul hit a six over midwicket off Josh Hazlewood. The match was reduced to eight overs as the pitch was affected by rain. Rohit Sharma looked unstoppable hitting 10 runs to Pat Cummins in the second over of India’s innings.

Australia then introduced Adam Zampa into the attack and he cleaned up opener KL Rahul for 10. Virat Kohli then joined Rohit Sharma to take India’s total beyond the 50-run mark in the fourth over.

Speaking at the post-match presentation, where he won the Man Of The Match award, Rohit said that he was surprised by his own batting.

“I was quite surprised as well actually. Didn’t expect to hit it like that, glad it came off. For the last 8-9 months I have been playing like that. You can’t really plan too much is such a shortened game,” said Rohit.

The India skipper also talked about how the dew kicked towards the Australia innings and also said he doesn’t want talk too much about Jasprit Bumrah’s performance on his return to the team.

“The bowlers had something to bowl to and we bowled well. The dew started coming in later, which is why we saw a few full tosses from Harshal. Coming back after a couple of months, the back injury can be tricky. I am not going to talk too much about how he bowled. Got us the crucial wicket. As a team we are not going to analyse too much. Just want him to come and enjoy,” said Rohit.

The skipper praised Axar Patel as well and said that he would like to see how he performs with the bat as well. The India skipper was also happy with Dinesh Karthik’s role as the finisher of the team.

“Axar can bowl in any stage, gives me an advantage of using the other bowlers in different situations too – maybe use the pacers in the middle overs if he bowls in the powerplay. I would like to see his batting as well.”

“Glad DK could finish well. Been a while since he had some time in the middle. There was this thought if we should get Rishabh in but I thought Sams is going to bowl off-cutters, so I thought let DK come in and he is playing that role anyway for us. Groundsmen have been here since 1.30 pm to get the outfield ready,” said Rohit.