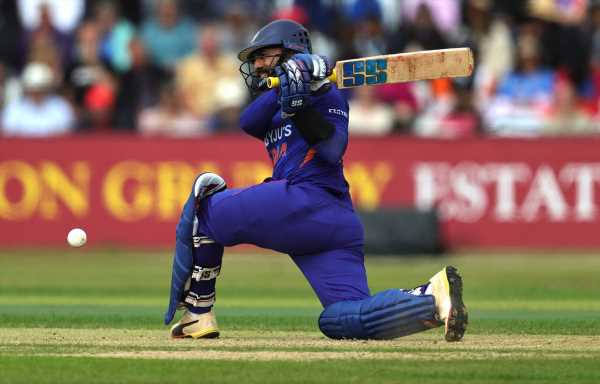 As the Indian and Australian teams moved to Nagpur for the second T20I game on Friday, Australian cricket legend Matthew Hayden confessed he is confused with Dinesh Karthik’s role in the side.

In the first T20I game at Mohali on Tuesday, Karthik, who was assumingly picked as the finisher, came in to bat after Axar Patel.

‘This role Dinesh is playing now, for the life of me, I can’t work out why he wouldn’t be in their batting now. It doesn’t make any sense to me whatsoever,’ Hayden, one of Star Sports’s match commentators, said.

‘See, I don’t want to give the impression that I’m disrespecting Dinesh Karthik, but he should be batting more,’ Haydos pointed out.

‘He is such a good player that he can come in and play this exact same shot. I question the role that he is playing as a finisher. I think there is a role for him to come up the order,’ Haydos added.

These sentiments were echoed by Ajit Agarkar who explained how important it is for India to get the most out of Karthik, more so because the team management back the veteran wicket-keeper-batter more than Rishabh Pant.

‘I find it very strange with regards to Dinesh Karthik,’ Agarkar said. ‘He is a good enough batter to walk in now. Doesn’t have to after the 16th over. And as improved as Axar Patel is, you have the expectation from Karthik to manage this sort of situation.’

‘At least you hope he does, considering he is playing ahead of Rishabh Pant in this XI,’ Agarkar added. ‘It happened in the South Africa series and again, Axar is batting ahead of him.’