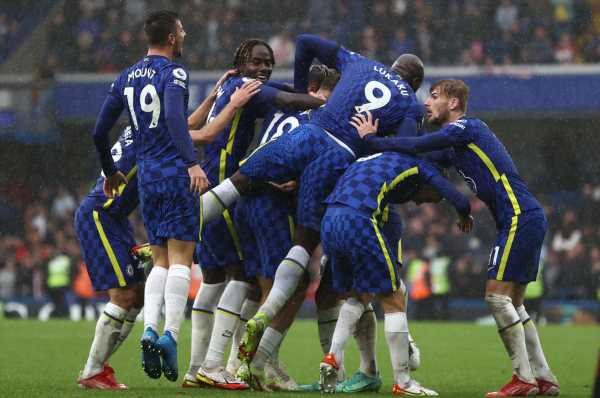 Images from the English Premier League matches played on Saturday. 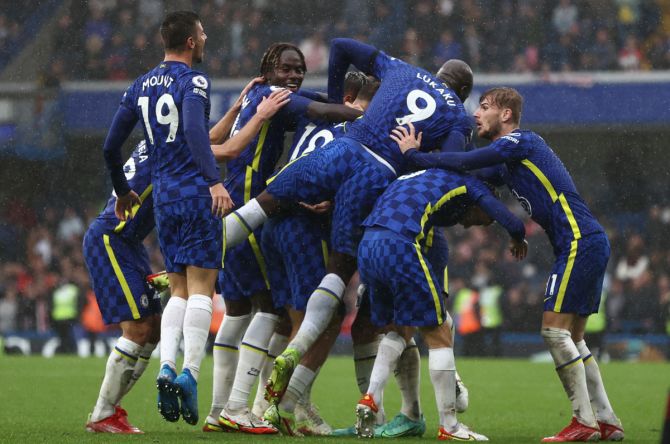 Chelsea got back to winning ways with a 3-1 victory over Southampton to move top of the Premier League but Manchester United stuttered again at home on Saturday as they were held to a 1-1 draw by high-flying Everton.

After consecutive defeats for only the second time since Thomas Tuchel took charge, Chelsea needed a response and they got it as Timo Werner and Ben Chilwell struck late on after Southampton had been reduced to 10 men.

Tuchel’s side move to 16 points from seven games, two more than Liverpool who host Manchester City in Sunday’s big clash.

Manchester United and Everton are also locked on 14 points after the early kickoff at Old Trafford ended honours even.

With Cristiano Ronaldo, scorer of a last-gasp winner against Villarreal in the Champions League on Wednesday, starting on the bench, United took a deserved lead when Anthony Martial was played in by Bruno Fernandes to score just before halftime.

United were pegged back though when Andros Townsend finished off a sweeping move and Rafa Benitez’s side thought they had snatched victory when Yerry Mina slotted in but after a VAR review he was adjudged to have been offside.

It was a let-off for United but they were still left frustrated at dropping points, especially with a tough run of league fixtures ahead.

“We had 75% possession. We got hit on one break that cost us and we lacked that cutting edge to get the important second goal,” United manager Ole Gunnar Solskjaer said.

“We just couldn’t get that second goal you need in games like this as Everton can score a goal from nowhere.” Ronaldo came off the bench but this time the Portuguese could not summon a dramatic ending.

“It’s about picking the right moments (to give Ronaldo a rest),” Solskjaer said when asked about the decision to leave him on the bench and start with Edinson Cavani.

After Chelsea failed to score in their last two games, it was unsung academy product Trevoh Chalobah who put them in front after nine minutes.

Romelu Lukaku and Werner both had goals ruled out and when, on the hour, Ben Chilwell tripped Tino Livramento in the area to earn Southampton a penalty that James Ward Prowse converted, it looked as though the visitors would earn a point.

But Ward Prowse was red-carded for a poor tackle on Jorginho and Chelsea took advantage to claim the win. Promoted Norwich City earned their first point of the season and ended a run of 16 consecutive Premier League defeats as they ground out a 0-0 draw at fellow strugglers Burnley.

Newcastle United’s troubles also continued as the Magpies went down 2-1 at Wolverhampton Wanderers for whom South Korean forward Hwang Hee-chan struck twice from assists by Raul Jimenez to help Wolves move clear of the relegation zone.

Norwich remain bottom with one point with Newcastle and Burnley, who are also winless, on three.