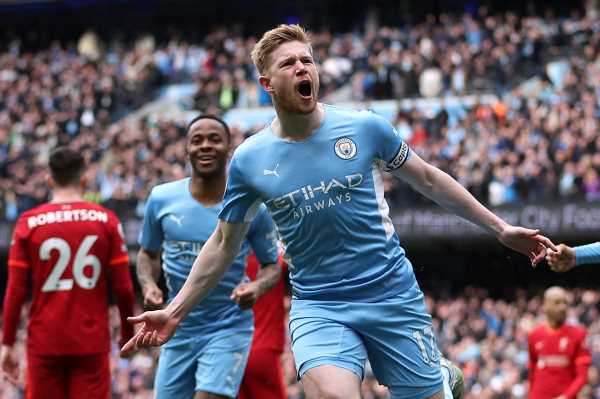 Manchester City remained one point clear of Liverpool at the top of the Premier League standings after the highly-anticipated clash of the giants ended in a pulsating 2-2 draw at the Etihad Stadium on Sunday.

The match lived up to its billing right from the off as City flew out of the traps, racing into a fifth-minute lead after Kevin De Bruyne’s strike was deflected past Liverpool goalkeeper Alisson.

City, playing with the high pressing intensity which their opponents are famed for, could have taken the lead moments earlier but Raheem Sterling shot softly at Alisson from a glorious position.

With the raucous home crowd sensing Juergen Klopp’s side were wobbling, however, Liverpool showed their mettle as they regrouped and levelled eight minutes later through Diogo Jota, assisted by a perfectly-cushioned Trent Alexander-Arnold pass.

The tempo was relentless, the action gripping and the momentum shifted again when Gabriel Jesus restored City’s lead in the 36th minute.

Liverpool cleared a corner only as far as Joao Cancelo and the Portuguese full back floated the ball back deep into the box where Jesus had stayed onside, nipping past Alexander-Arnold and steering the ball past Alisson.

It was the first time Liverpool had trailed at the break in the Premier League this season, but they did not need long to restore parity, scoring 46 seconds after the restart. 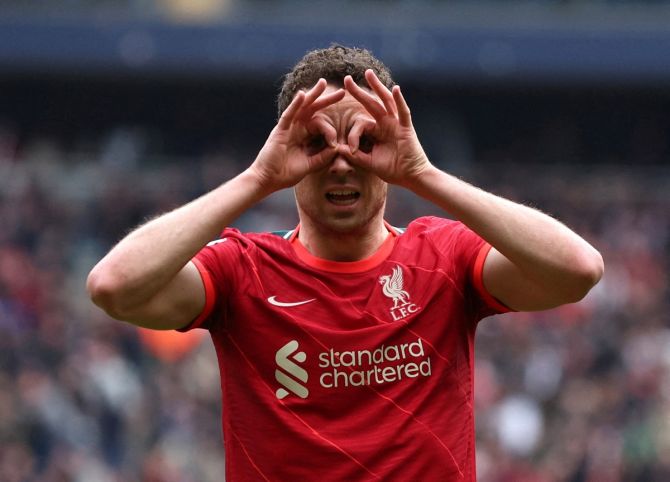 Mohamed Salah picked the ball up on the right flank and split the City defence with a superb pass to Sadio Mane who burst goalwards before converting with his customary precision.

City were stunned but Pep Guardiola’s side recovered to regain control of the midfield for much of the second half and they came closest to winning the game.

Raheem Sterling thought he had again given the hosts the advantage in the 63rd minute, racing on to a brilliant De Bruyne through ball, only for the former Liverpool forward to be ruled offside following a VAR review.

In the 90th minute, City substitute Riyad Mahrez shaved the outside of the post with a free kick and in stoppage time the Algerian had a great chance to win the game but his attempted chip was off target.

The result was a repeat of October’s scoreline at Anfield and was the first time City had scored first and not gone on to win in the Premier League this season.

A fourth Premier League crown in five seasons is in City’s hands, though, as they moved on to 74 points, one ahead of their title rivals, but with seven games left for both teams there is still plenty of work to do. 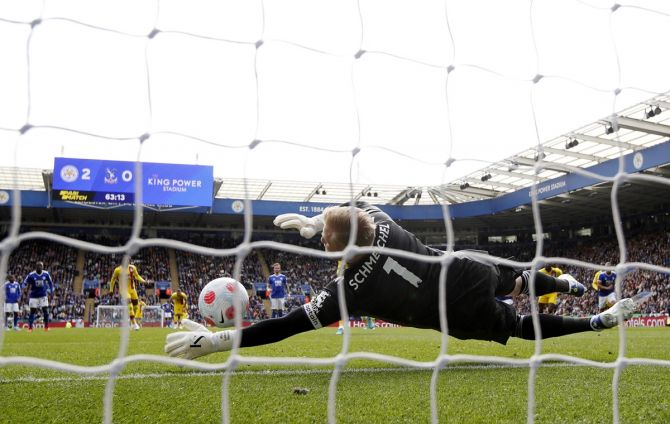 Midfielder Kiernan Dewsbury-Hall set up Leicester City’s first goal and scored a sublime second as they traded places with opponents Crystal Palace to go ninth in the Premier League after a tense 2-1 win at the King Power Stadium.

Two moments of quality from the Leicester academy graduate, 23, within six first-half minutes for the hosts proved enough to separate the teams despite a late surge from Palace after Wilfried Zaha’s goal.

Dewsbury-Hall picked up the ball in midfield and threaded a pass for winger Ademola Lookman, who fired past Palace keeper Vicente Guaita with 10 minutes remaining in the first half to score his first goal since February.

Palace defender Marc Guehi miscontrolled the ball in his own half, allowing Leicester forward Patson Daka to find Dewsbury-Hall. The midfielder curled a powerful shot from 18 yards to score his first Premier League goal seconds before halftime.

“I have dreamt it since I was a little boy,” Dewsbury-Hall said. “It means so much. It’s a dream come to true to score in the Premier League.”

Having missed a handful of early chances, Patrick Vieira’s side finally gave Leicester reason to sweat after halving the deficit in the 65th minute when Zaha headed in the rebound from his retaken penalty after his first attempt was saved by Kasper Schmeichel.

Palace were awarded a spot-kick when Youri Tielemans tripped Jordan Ayew and Schmeichel had pushed away Zaha’s effort but, the penalty was retaken following a VAR check which spotted encroachment from Leicester defender Caglar Soyuncu.

Leicester weathered the visitors’ attacking spells to see out the win and move into ninth in the league standings with 40 points and two games in hand over Palace, who are three points behind in 10th place.

Midfielder Pierre Lees-Melou scored his first goal for the club and Teemu Pukki’s late strike secured a vital win for bottom side Norwich at Carrow Road.

The hosts went ahead in the ninth minute as a corner found its way to Frenchman Lees-Melou, whose shot from the edge of the penalty area took a deflection off Josh Brownhill and flew in after clipping the post.

Forward Pukki fired into the far corner in the 86th minute to double the lead after latching on to Mathias Normann’s superb through ball which caught Burnley’s defence totally off guard.

Earlier, Burnley’s Maxwel Cornet sliced a low cross by Dwight McNeil wide from point-blank range and Norwich wasted opportunities to put the game to bed, as Grant Hanley headed onto the woodwork and Milot Rashica had a shot saved.

Norwich’s first league victory since January took them to 21 points with seven games remaining and followed last weekend’s 0-0 draw at Brighton & Hove Albion, giving manager Dean Smith hope they can pull off a miracle and escape the drop.

Brentford continued their resurgent form by beating West Ham United 2-0 at home in to rack up a fourth win in five matches and take another step towards guaranteeing their Premier League survival.

Fresh from their shock 4-1 win at Champions League holders Chelsea last week, Thomas Frank’s side overwhelmed another side with European ambitions, Bryan Mbeumo opening the scoring in the second half before top scorer Ivan Toney doubled the lead.

Brentford struck first after quick-thinking following a throw-in as Toney slipped the ball into the path of French forward Mbeumo, who slotted into the net with a first-time finish in the 48th minute.

Mbeumo repaid the favour by crossing for Toney to head home from close range in the 64th and the Frenchman could have added another goal but sent a volley from inside the area fizzing over the crossbar.

Brentford’s lead was rarely threatened by a lethargic West Ham side and they comfortably saw out the win to climb to 13th in the table on 36 points, 12 clear of the relegation zone.

Frank’s side lost seven games out of eight before turning the tide with a 3-1 win at Norwich City in early March and their was a euphoric mood around the stadium as the players went over to the fans behind the goal to celebrate.