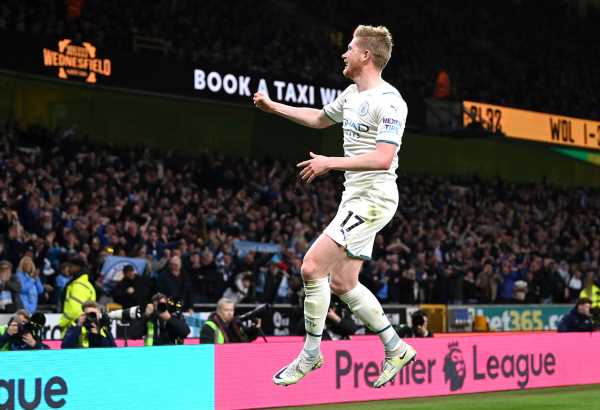 Manchester City’s midfield genius Kevin De Bruyne scored four goals on Wednesday in a 5-1 win at Wolverhampton Wanderers to put his team in a commanding position to retain the Premier League with two games remaining.

The Belgian put the game to bed with a hat-trick in a devastating 18-minute spell in the first half, before notching a fourth after the break as the away fans alternated between chanting “Kevin De Bruyne” and “Champions of England”.

The win leaves Pep Guardiola’s side top on 89 points, three ahead of Liverpool whom they also lead on goal difference, with the title now firmly in their sights.

A second consecutive Premier League title would assuage disappointment at their Champions League exit, after City fell in the semis and Liverpool reached the final.

At Molineux, De Bruyne scored the third earliest hat-trick in Premier League history and his first for Manchester City.

For the first goal, he began the move before running on to Bernardo Silva’s return pass for a sumptuously-placed finish in the seventh minute. De Bruyne smashed in a rebound for his second in the 16th minute, before deploying his supposedly weaker left foot for a glorious curler from the edge of the box in the 24th.

“The third goal was my favourite. I think that strike is the cleanest. I hit it really hard in the corner. Out of the three, that was the purest,” he said.

“When you score four goals, it’s always something special. It should have been five to be honest!” he added, lamenting that a late strike hit the post.

No strangers to upsetting Premier League big boys, Wolves had briefly threatened when Leander Dendoncker made it 1-1 after a flowing break, before De Bruyne stole the show.

He scored a fourth from close range in the 60th minute, before team mate Raheem Sterling completed another easy win for City with his 84th-minute goal.

Guardiola was purring at his midfielder, praising him for both creating and scoring so many goals for Manchester City in recent years. “Unstoppable, brilliant, awesome, outstanding, perfect,” he said.

Manchester City play West Ham away and then Aston Villa at home in their remaining two Premier League fixtures, with one win and a draw guaranteeing the title.

Liverpool have an FA Cup final against Chelsea on Saturday before facing Southampton away and Wolves at home in their last two league matches.

“When you have players like De Bruyne, who can always change the game, you can have a strategy, but when it comes to players like this, they can score four goals and finish the game,” said Wolves first team coach Carlos Cachada.

“With that performance we can do nothing about it.” The fixture was important for both teams, with Chelsea needing five more points to be sure of a top-four finish prior to their trip north, while Leeds’ top-flight status remains in the balance.

The hosts, however, could not have got off to a worse start as Mount fired Chelsea in front inside four minutes, before a reckless challenge from Dan James saw him sent off 20 minutes later, leaving Leeds with a mountain to climb.

There only looked like being one winner from that moment on, with Chelsea putting the game to bed in the 54th minute as American forward Pulisic slotted home from the edge of the area, before Lukaku hammered in a late third to seal victory.

A third successive league loss for Leeds means they stay in the bottom three on 34 points from 36 matches, level with 17th-placed Burnley, who have a game in hand, making Sunday’s clash with Brighton & Hove Albion pivotal for Jesse Marsch’s side.

“We talked about keeping it 0-0 as long as possible but I thought we were aggressive and the game still was there for us at 0-1 – the red card changes the match,” Marsch said.

“The guys are gutted because we are not giving ourselves the chance we want to. Our guys do everything they can, fight for each other, to keep ourselves in this league. We have to do everything we can to be ready for the next challenge on Sunday.”

Coming into the match, Leeds had conceded 34 home league goals this season, their most in the top-flight in a single campaign since 1959-60.

Lessons had not been learned as Mount was left all alone to break the deadlock. The fourth-minute goal was the earliest Leeds have conceded in a Premier League match since December 2020.

In a moment of carelessness, James scythed Chelsea midfielder Mateo Kovacic needlessly down on the halfway line and was handed his marching orders, meaning he will miss the rest of the season. The tackle also ended the Croatian’s match.

Belgian striker Lukaku, who has endured a difficult season after joining Chelsea from Inter Milan, then went close to his third goal in his last two matches with a header that flashed just wide.

Leeds offered no attacking threat in the opening period, finishing the half without having had a shot on target, causing audible frustration from all around Elland Road after the break with more errant passing.

Chelsea went ahead 2-0 when Mount flicked the ball into Pulisic, who was left free to pick his spot.

Lukaku capitalised on more poor defending from the hosts to make it 3-0 as frustrated Leeds fans headed for the exits seven minutes from time.

“I was very happy with the level of performance overall,” Tuchel said. “We were very strong when it was 11 against 11, and obviously you have an advantage after their sending off.

“But at the same time the level of focus has to stay high as Leeds will never stop fighting.

“It was necessary to change things after the run we had been on, we needed to step up. We did this as a team, we did our stuff on a much higher level than in the last few matches.” Jamie Vardy scored twice on his return to the starting lineup as Leicester City moved into the top half of the Premier League table with a 3-0 home win over relegated Norwich City on Wednesday.

The largely meaningless match, with the Foxes out of contention for the European places but safe from relegation while Norwich were already condemned to the drop, ended Leicester’s run of seven games without a victory.

Leicester, now 10th and a point ahead of Crystal Palace, were dominant but Teemu Pukki came close for the visitors when he hit the post in first-half stoppage time.

Vardy then broke the ice in the 54th with a deflected right-footed shot from the left of the box and made it 2-0 in the 62nd before James Maddison scored the third in the 70th against his former club.

Norwich, now on five straight league defeats and rooted to the bottom, dropped Dutch goalkeeper Tim Krul for Angus Gunn in one of four changes to the side that lost 4-0 at home to West Ham United on Sunday.