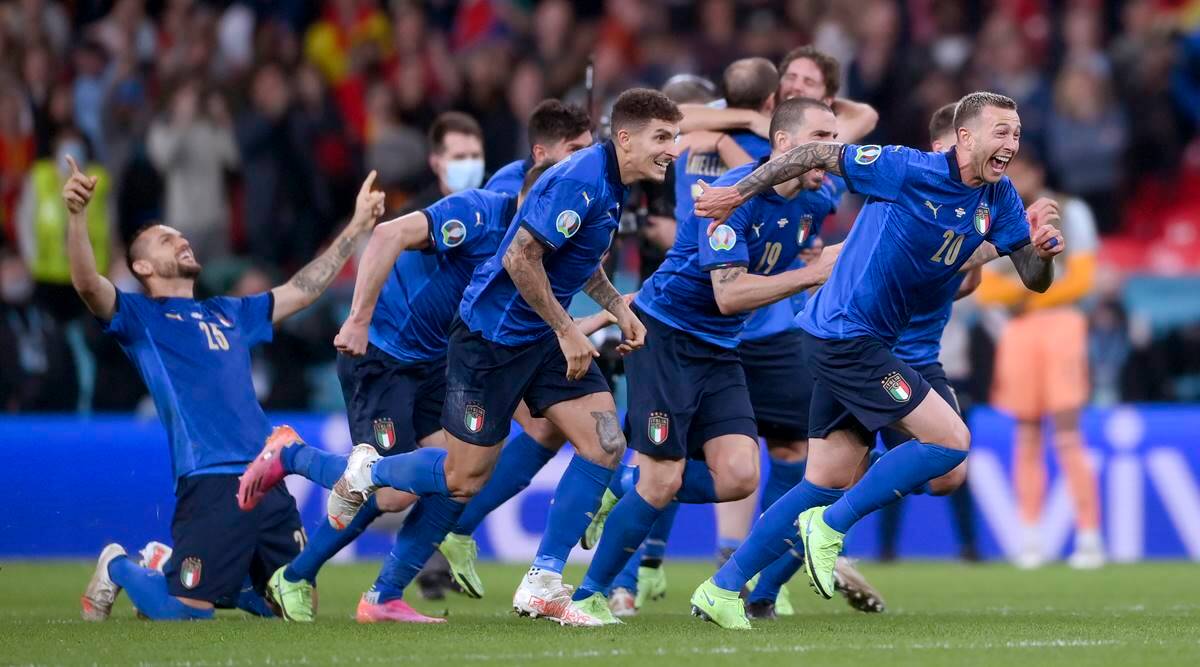 There's more than luck involved in winning a shootout, as was seen in Spain-Italy nerve-shredder The moment Jorginho’s ludicrously serene shot rolled into the bottom right of the net and propelled Italy to the finals, Spain’s goalkeeper Unai Simon lying splayed in the opposite direction, Gianluigi Donnarumma sank to his knees and wept like a child, before he was buried in a pile of bright blue jerseys. Donnarumma, the 22-year-old Italian goalkeeper, had moments ago made the most important block of his blossoming career, when he repelled a feeble strike by Alvaro Morata.

The Spanish striker, whose 80th-minute equaliser had kept Spain in the game and dragged the game to extra time and beyond, stumbled to the ground crestfallen, consoled by the seen-it-all veteran Sergio Busquets. Simon, the hero of Spain’s shootout win over Switzerland the game before, wore a resigned look as he trudged his six-foot-four frame back to the mourning dugout. His own words after the Swiss game would have boomed in his ears. He had summed up the capricious nature of penalty shootouts most philosophically: “You have to erase your mistakes, forget about them. You have to erase your good moments too because of what awaits. We can enjoy this now, but tomorrow is a new game, a new day.” 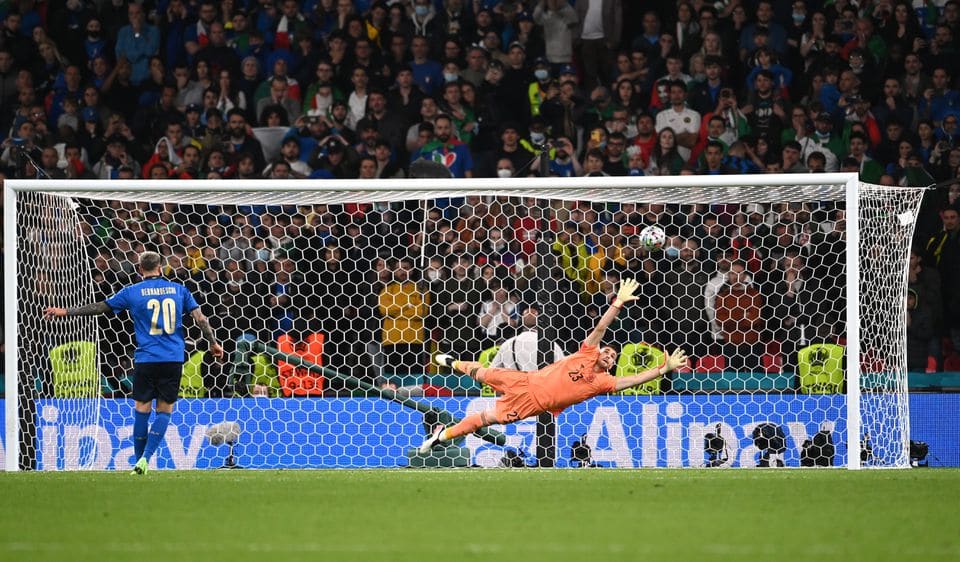 Spain, who were clearly the more fluent side in this intense battle of wits and tactics, of carefully designed ploy and counter-ploys, were understandably heartbroken. Italy, who were not as slick or sharp as they had been in the entire tournament but went ahead through a sumptuous strike by Fernando Chiesa, could feel a shiver of relief that their worst day in this campaign went unpunished. Spain could feel letdown by their fate, defeated not by two hours of exhilarating football they played, but by the lottery of shootouts, an unsatisfactory way of forcing contests to a conclusion, a twist of fate, a misplacement of inches.

By now, penalty shootouts, at its best pure theatre unto itself, will be sick of hearing the condescending tone that accompanies it. As if, all a team needs to prevail in the crucible of nerves is an arrangement of favourable stars.

It clearly is not, and the Italy-Spain shootout provides ample proof of skill, of mind, brain, and feet, that is required to emerge victoriously. The result could be summarised in two ways. Italy won because their goalkeeper made a crucial save. Spain lost because their penalties were indecisive. As with everything else in football, it’s a skill that requires constant practice and polishing, a lot going behind making that one crucial save as well as firing that one decisive stroke. It requires luck; just as it needs brilliance.

It’s about performing a skill under extreme pressure, the sort of pressure that could dizzy the iciest of brains. The list of illustrious players who have missed penalties in shootouts is long and luminous, one that includes Roberto Baggio and David Beckham, Lionel Messi and Cristiano Ronaldo. Or most recently Sergio Busquets and Kylian Mbappe. So Alvaro Morata was not alone in this group of ignominy. It might haunt for years, but football does, offer chances for redemption, especially for someone as bright as Morata, who at 28, has a fair share of his career ahead of him.

On this night, though, his shot was tired and impotent. Donnarumma knew exactly where the Spaniard would fizz his shot, from the hours spent at studying the opponent’s clips, from the memory of having encountered him in Serie A and from the inputs he had gathered from Morata’s former teammates at Juventus.

His teammate Dani Olmo, arguably the best player in the match in normal time, scythed the ball over the crossbar. He seemed in two minds, whether to go for power and direction or pause to see which way the goalkeeper went. He had a warning, as Italy’s Manuel Locatelli was the victim of the same dilemma that saw his shy, te first, cushioned to safety by Simon. 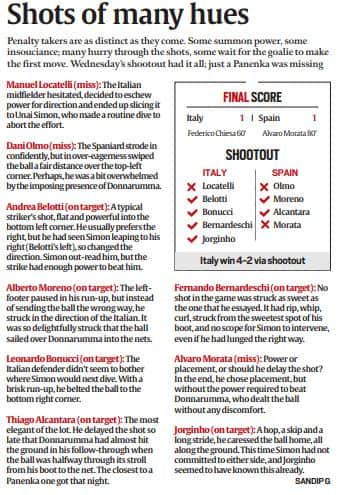 It was the last slice of fortune Simon enjoyed. The next three Italians—Andrea Belotti, Leonardo Bonucci and Fernando Bernardeschi—embraced firepower over finesse. The Spaniards matched up to them, with the much-maligned Alberto Moreno and Thiago keeping Spain the game. Moreno’s was a sweeping shot that settled into the right corner like a postage stamp while Thiago’s bordered on roguish arrogance. At that moment, Spain seemed to have the momentum, but for Morata’s expensive mistake, not wrought by luck, but a lack of composure.

It might have been a shot he had practised a thousand times after practice sessions. Teams take penalty shooting seriously. It’s usually the last bit of training in a session, when players are utterly drained, so as to simulate match situations as shootouts happen at the very end of the games. Italy’s set-piece coach Gianni Vio would make his players hit at least a hundred of them. Conversely, goalkeepers too face hundreds of strikes every training day. Donnarumma’s predecessor Gianluigi Buffon, who has endured several shootout heartbreaks as well as delights, used to make strikers hit at him from a shorter distance. He made them hit in the opposite direction to which he was leaping so as to improve his reflexes and control of the body. Quite a few of his saves were thus effected with his lower body, especially his shin.

A lot of dissection and detailing goes behind it too. For instance, coaches measure the time a player consumes from standing behind the ball and hitting it, from which they gauge whether he’s nervous or not. Team physiologists are often regularly in touch with goalkeepers before and after shootouts. The data teams mine the minutest detail of a goalkeeper or a player. So to call it pure lottery is cruel. There is a science to it. There is an amalgam of physical and mental skills too.

In a setting without pressure, all three who missed their shots on Tuesday night would have found the back of the net. So would have Baggio and Mbappe. But pressure it was, and in some moments it dizzies the brain of the iciest. Morata froze, Jorginho flourished and Donnarumma wept.