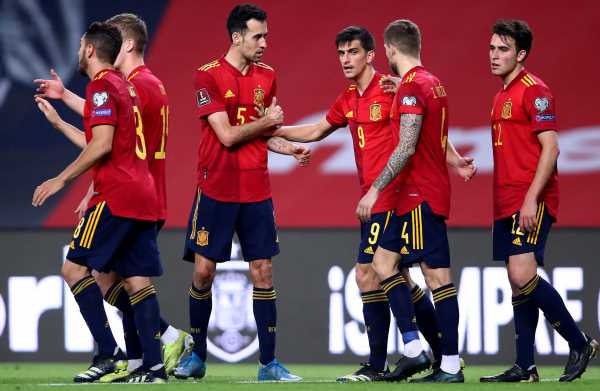 Spain’s soccer players will receive COVID-19 vaccines, health minister Carolina Darias said on Wednesday, after the team’s preparations for Euro 2020 were thrown into disarray by Sergio Busquets and Diego Llorente testing positive for the virus.

Darias told a news conference the players would be vaccinated by the army, as was the case with Spanish athletes heading to the Olympic Games in Tokyo next month, describing the move as a “very important and necessary decision”.

Following captain Busquets’ positive test at the weekend, Spain’s players have been in isolation and only able to train on an individual basis – with their first game just three days later.

That forced him, like Barcelona’s Busquets, into quarantine meaning both will miss Spain’s Group E opener against Sweden on Monday.

Spain’s stand-in captain Jordi Alba said earlier on Wednesday that the players would do as they were advised by the government, amid a debate over whether professional athletes should be allowed to jump the queue for vaccines.

“The players have nothing to say about it, there are many opinions on this issue and they should all be respected and if we are told to get the vaccine we’ll get it,” he told Radio Marca.

Alba also said the first team was coping well with being isolated from each other following Busquets’ positive test, adding he would like coach Luis Enrique to wait for his Barcelona team mate to recover.

Both Llorente and Busquets could return for Spain’s second game against Poland on June 19 although Luis Enrique has until June 12 to consider replacing either on medical grounds.

Should he decide to replace Busquets or Llorente, he will turn to a 17-man parallel squad that has been training separately to the first team.

Sweden have also been rocked by two players – Dejan Kulusevski and Mattias Svanberg – testing positive. Scotland also had a positive case ahead of the 24-team tournament, which begins on Friday when Italy host Turkey.