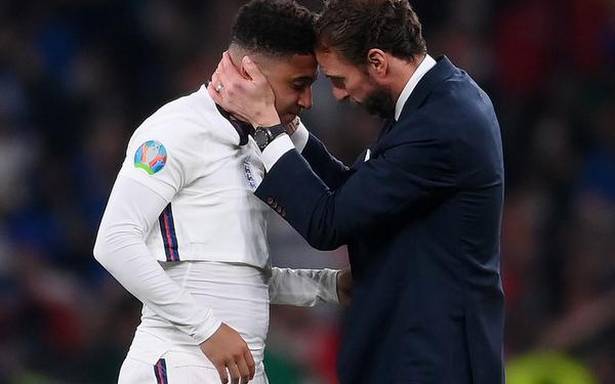 Gareth Southgate could feel Bukayo Saka’s anguish. Having a decisive penalty saved in a European Championship match can be such a lonely experience.

It still follows Southgate 25 years after his missed spot kick in the semifinals against Germany. Now he had to accept responsibility, having selected Saka to take what would be the last kick of Euro 2020.

The focus will turn to Southgate’s decision-making. Should he have asked a 19-year-old to step up for such a pressure-packed moment?

Raheem Sterling wasn’t even included among the five penalty takers.

Marcus Rashford and Jadon Sancho were brought in the 120th minute just in time to take penalties. Liverpool’s Premier League and Champions League winner, Jordan Henderson, was deemed less suitable for a penalty than Sancho.

“It’s down to me,” Southgate said. “I decided on the penalty takers based on what we’ve done in training. Nobody is on their own. It totally rests on me.”

Southgate showed his backing for the players. “They were the best takers we had left on the pitch,” he said. “We win and lose together.”