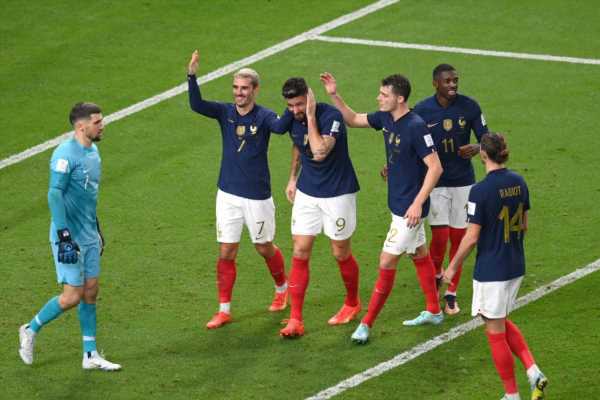 France will start their World Cup last-16 clash as overwhelming favourites on Sunday but opponents Poland are well equipped to derail Les Bleus’ title defence at the Al Thumama stadium.

France qualified for the knockout phase with a game to spare after two stylish performances against Australia and Denmark and were quick to move on from a 1-0 defeat by Tunisia in the last Group D match after playing with a reserve side.

Poland went through despite a 2-0 loss to Argentina in their last Group C game, carried through the opening phase by their sturdy defence and the touch of striker Robert Lewandowski.

France will enter the contest with most of their top players having recharged their batteries, but patience, more than energy, might be key against Poland.

“They have experienced players. Obviously, Lewandowski is a stand-out player, one of the best strikers in the world. We should not underestimate them.” said coach Didier Deschamps.

“It’s a World Cup game, anything is possible. Being the favourite doesn’t mean anything.”

France often struggle against compact sides who defend deep, such as Poland, but Deschamps has the tools at his disposal to crack a game wide open.

While Kylian Mbappe, who is chasing records in Qatar after already scoring seven World Cup goals before the age of 24, might find it hard to use his devastating pace against a packed defence, the forward’s relentless dribbling, jinking one way before bursting past the other, could prove tough to handle for the Poles, who will also need to keep a close eye on Olivier Giroud in the box.

The 36-year-old target man will become France’s all-time top scorer if he finds the back of the net for his 52nd international goal and move one ahead of Thierry Henry.

The French defence has been far from perfect so far, with Raphale Varane looking below his best after a hamstring injury, and the Manchester United player will need to find top form as a mouthwatering duel with Lewandowski looms.

“The best way to defend against him is to make sure he does not get the ball,” said Coman, his former teammate at Bayern Munich.

France’s last line of defence, keeper Hugo Lloris, will be on high alert should Lewandowski receive the ball in the danger zone. Lloris is set to earn his 142nd cap, which will bring him level with record holder Lilian Thuram.

The winner of Sunday’s match will face either England or Senegal in the quarter-finals.