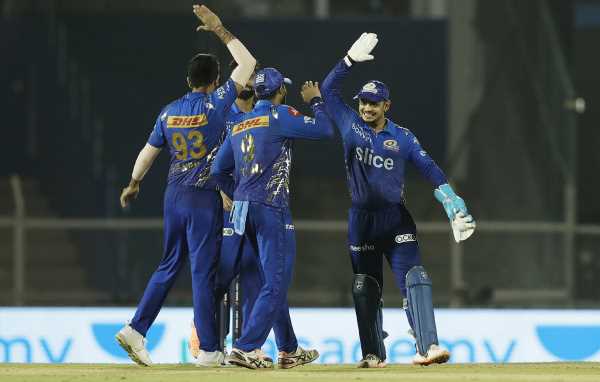 The Gujarat Titans have sneaked home against all odds in a few close games in IPL 2022, but this time they were at the receiving end as the Mumbai Indians snatched victory from the jaws of defeat.

Chasing 178 for victory, Gujarat were in complete control courtesy of half-centuries from openers Wriddhiman Saha (55) and Shubman Gill (52).

MI’s bowlers showed great resolve to keep their team in the hunt by chipping away at the wickets in the middle overs.

However, the odds were firmly stacked in Gujarat’s favour with 29 needed from three overs for victory with seven wickets in hand.

Captain Hardik Pandya looked all set to take his team to victory as he had stroked his way to 24 from 14 balls. However, he lost his wicket at a crucial stage in the contest.

After David Miller under edged Riley Meredith to wicket-keeper Ishan Kishan, Hardik called him for a quick single. Kishan was quick to get to the ball and throw down the stumps with a direct hit, catching Hardik inches short. The GT skipper seemed quite sure of making his crease and didn’t attempt to dive.

Hardik’s wicket proved to be a big blow for the Titans as they messed up which otherwise should have been a straightforward run chase.

Daniel Sams bowled a brilliant final over as Gujarat finished on the losing side despite needing nine from the last six balls, with MI registering just their second victory from 10 games in IPL 2022.