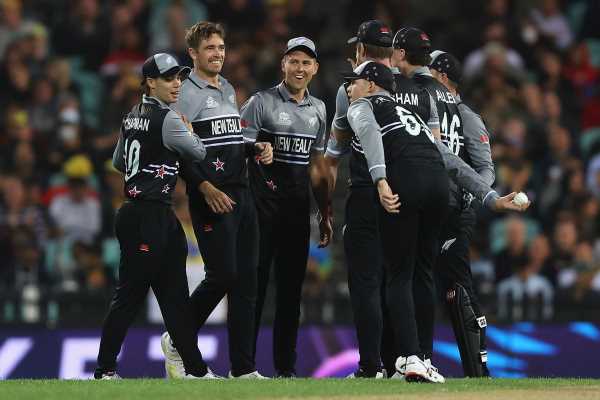 England recovered from their shock loss to Ireland to win their final two matches and maintain a run-rate advantage over Australia.

Afghanistan will rue the weather, which denied them a chance to play Ireland and New Zealand midway through the group stage.

England’s final-over win over Sri Lanka on Saturday brought the curtain down on Group 1 and consigned Australia to an early exit from their own tournament.

The ICC Men’s T20 World Cup hosts and defending champions were watching on nervously, hoping for an England defeat to give them a reprieve. But England’s victory, with two balls to spare, ensured they finished above Australia, with New Zealand topping the group.

New Zealand’s crunching win over Australia in their opening game ultimately proved decisive, with three teams finishing tied on seven points but the Kiwis topping the group thanks to a superior net run rate.

The Black Caps head through to the first semi-final, where they will face the runners-up in Group 2, with the final round of fixtures in that group still to come on Sunday.

New Zealand’s semi-final will be at the Sydney Cricket Ground on Wednesday, 9 November.

England recovered from their shock loss against Ireland to win their final two matches and maintain a run-rate advantage over Australia.

Jos Buttler’s side will face the winners of Group 2 in the final four, although may require a selection change after Dawid Malan was forced off against Sri Lanka due to injury.

England’s semi-final will be at the Adelaide Oval on Thursday, 10 November.

A huge loss to New Zealand and a washout against England took three points off Australia, and the defending champions failed to fire enough with the bat in their three victories to restore a positive run rate.

There will be plenty of regrets, with the hosts never seeming to maximise their potential.

A talented side, Sri Lanka came into the tournament on a high after their Asia Cup triumph earlier in 2022.

The shock loss against Namibia was a wake-up call, but after recovering to make it through Round 1, Sri Lanka knew they needed to beat a higher-ranked team to make a mark in the Super 12 stage. They failed to do so, losing to all three of New Zealand, Australia and England.

Finishing fourth is a boon though, with that placing guaranteeing Sri Lanka’s spot in the next T20 World Cup without the need for qualifiers.

Ireland’s wins over England and West Indies (in Round 1) will be days to remember, and yet the overall feeling after the tournament will be one of slight disappointment.

One more win would have seen Ireland secure their spot in the next World Cup, which would have been a big aim – but now they will head into a tricky qualification process.

Afghanistan will rue the weather, which denied them a chance to play Ireland and New Zealand midway through the group stage.

Even so, three defeats from the three games that were completed is an underachievement for a squad with plenty of talent.