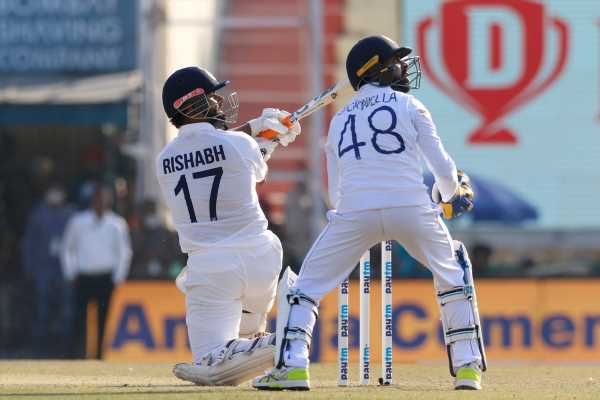 India’s Rishabh Pant stole the limelight in team mate Virat Kohli’s 100th Test with a blistering knock against Sri Lanka on Friday to keep the hosts on course for a big first innings total in the first Test at Mohali.

Wicketkeeper-batter Pant bludgeoned four sixes and nine fours in his innings of 96 in 97 deliveries as India reached 357 for six at the close of the opening day’s play after winning the toss and opting to bat.

With his incredible assault against the Sri Lankan spinners, the diminutive left-hander lifted the spirits of the spectators who were left disappointed after batting mainstay Kohli’s dismissal for 45 in his landmark Test.

The 24-year-old Pant, who at one stage of his innings took 32 runs in eight deliveries off Sri Lanka’s spinners, was a boundary shy of his fifth Test century when seamer Suranga Lakmal found a way through his defence in the first over with the second new ball.

Pant appeared distraught, closing his eyes in disappointment as he stood at the crease for a few seconds before trudging back to the dressing room. 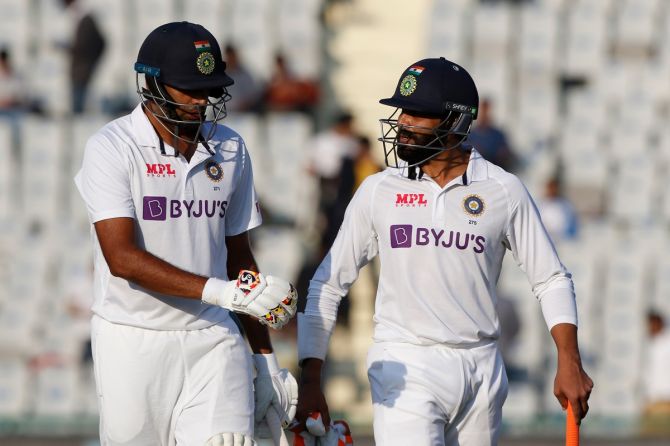 All-rounder Ravindra Jadeja, who partnered Pant in a sixth-wicket stand of 104, remained unbeaten on 45 with Ravichandran Ashwin 10 not out at stumps.

Pant also added 53 for the fifth with Shreyas Iyer after Sri Lanka fought back to put India in a spot of bother.

India, who have won 14 consecutive home series, appeared in a strong position when new number three batter Hanuma Vihari and Kohli added 90 for the third wicket to take them to 170-2.

But the touring side struck back when Kohli, who stepped down as captain after India’s 2-1 defeat in the previous series in South Africa, fell to left-arm spinner Lasith Embuldeniya as the ball spun past his bat to disturb the stumps.

Vihari was out for 58 soon, dragging seamer Vishwa Fernando on to his stumps, as India were reduced to 175-4.

The 33-year-old Kohli walked out to bat to a big cheer from the crowd in the northern Indian city of Mohali and every run the right-handed batter, who went past 8,000 runs in tests during his innings, scored was applauded.

He was also felicitated by the home board before the start of play with batting great and current India coach Rahul Dravid handing him a commemorative cap and a memento in the presence of his Bollywood actress wife Anushka Sharma. 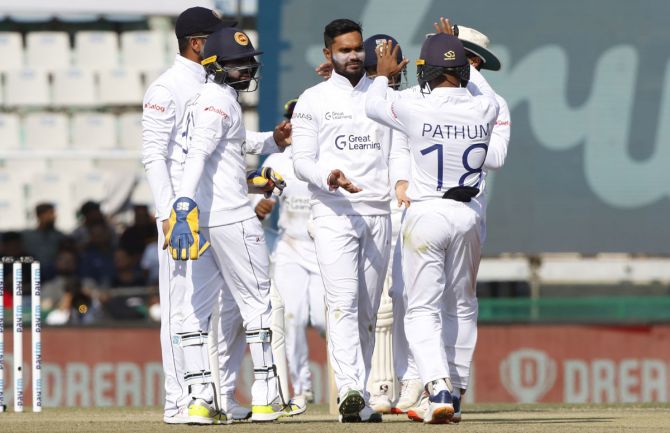 Rohit Sharma was the first wicket to fall for India on the opening day when he was dismissed for 29 in his maiden knock as test captain.

Rohit hit six fours in his 28-ball innings and added 52 with Mayank Agarwal for the opening stand. Agarwal was dismissed leg before for 33 to the 25-year-old Embuldeniya, who was impressive with his control though guilty of bowling many no-balls.

It was the first time after over a decade that India was playing a Test without both Cheteshwar Pujara and Ajinkya Rahane, who were dropped for inconsistent performances. Vihari and Iyer replaced the experienced batting duo.