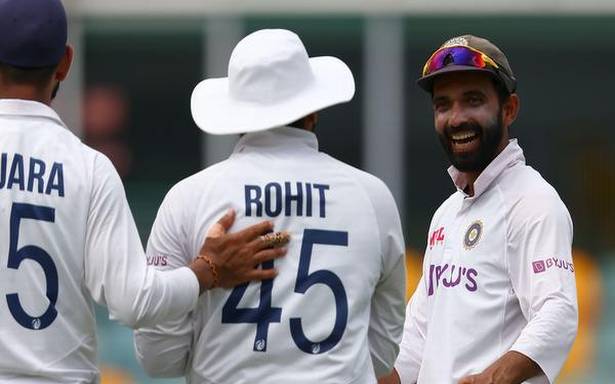 Ajinkya Rahane, who took over the captaincy from Virat Kohli after the debacle in Adelaide, has not put a foot wrong as skipper.

But speaking after the 2-1 series triumph, Rahane, who led from the front with a century in Melbourne, chose to highlight the performances of his teammates.

“I still don’t know what happened and don’t know how to describe this series win. But credit to each and every individual. If you see, especially after the Adelaide Test, everyone contributed,” he said.

“Credit to all the newcomers who chipped in. Nattu (Natarajan) played in his first Test and bowled well. Shardul Thakur played his second Test and contributed with bat and ball. Washington Sundar batted really well and bowled well in the first innings. Ashwin bowled well throughout the series,” he added.

Asked about how the squad dealt with being dismissed for 36 in the first Test, Rahane said, “It was really tough after the Adelaide Test but it was all about showing character and fighting spirit. We were not thinking too much about the result. We just wanted to play good cricket. Credit to everyone in the squad, including the support staff.

“It is an honour to lead the country, but it is about the team and not me. I looked good because everyone contributed. We all should enjoy this win, not just us players but every Indian should enjoy this because what we did here is historic,” he added.

The skipper praised the efforts of youngsters Shubman Gill and Rishabh Pant, and Cheteshwar Pujara for chasing down 328 on the final day.

“The way Gill batted for the last three Tests was really good. He was really composed, calm under pressure, and today everyone saw what he can do. Washington Sundar in his first Test, we know about his bowling, but the way he batted in the first innings with Shardul was really good. They have set the bench-mark for themselves and I am sure they will grow from here.”

Rahane also praised Pant’s courage, saying, “Credit to him, he took that risk and took on the Aussies. His and Pujara’s innings gave us the platform to win the game.”