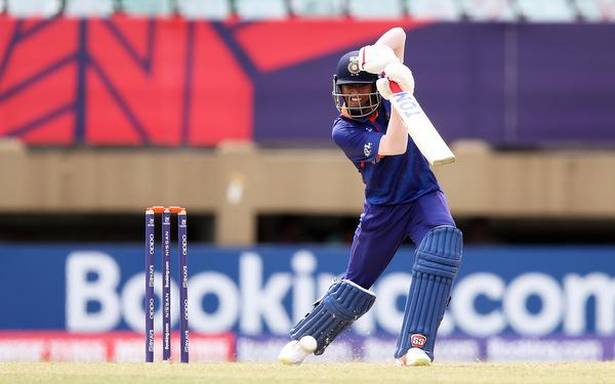 Men in Blue began campaign with win against Proteas

In-form batter and captain Yash Dhull will be expecting a much improved batting effort from his team when four-time champion India takes on Ireland in its second Group B match of the ICC U-19 World Cup here on Wednesday.

Having started its campaign with a 45-run win over South Africa, the Indians are brimming with confidence and are expected to steamroll Ireland at the Brian Lara Stadium.

Both India and Ireland have registered wins in their openers. While India beat South Africa, Ireland defeated Uganda by 39 runs.

Dhull single-handedly anchored the innings against the Junior Proteas as India lost its openers — Harnoor Singh and Angkrish Raghuvanshi — early after being put in.

Dhull would be looking for more support from his openers to ease the pressure on the middle and lower-order going into the knockout stages of the tournament.

If the Indian batters were not up to the mark against South Africa, it was a completely contrasting performance from the bowling unit. Left-arm spinner Vicky Ostwal (five for 28) turned out to be the star performer with the ball while right-arm fast bowler Raj Bawa (four for 47) gave perfect support as India bowled out South Africa for 187.

Meanwhile in the other match of the day, Australia will take on Scotland in a Group D game in Basseterre.