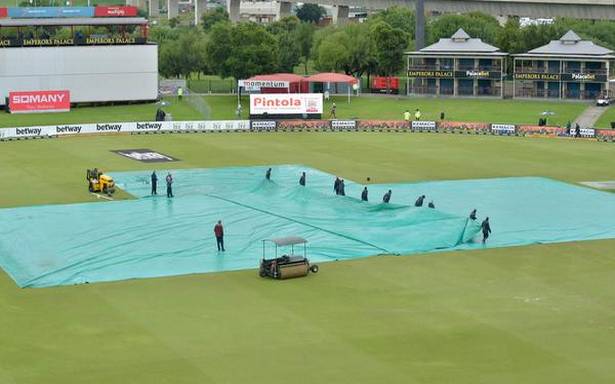 Racing against the clock, India will relook its game-plan for the next three days; scoring quick runs and declaring an immediate possibility

Covers guarded the square, super sopper was at work, and the groundsmen toiled.

But then, rain was unrelenting on day two of the first Freedom Test between India and South Africa at the SuperSport Park here on Monday.

The day’s play was abandoned in the afternoon without a ball being bowled.

India held the aces finishing day one at 272 for three with K.L. Rahul unbeaten on a 248-ball 122. And the freestroking Ajinkya Rahane, finally finding some form, was on a busy 40.

India would have sought to consolidate on the second day. Now it has to race against the clock with an entire day’s play being washed out.

The visitor would surely relook its game-plan for the next three days. Will India go for quick runs on the first session of day three (if weather permits play) and a declaration is on the cards somewhere.

Rahul Dravid was an attacking captain and his mindset is likely to be no different as a coach.

Fortunately, the forecast for Tuesday and Wednesday is much better. However, a downpour is expected on day five.

The break in play also gave us an opportunity to reflect on K.L. Rahul’s outstanding innings.

His was a knock that had everything, impeccable judgment around off-stump, patience, a sound defence, decisive footwork and typically flowing strokes.

Importantly, he played the ball late that is so crucial on these pitches against the sort of attack he faced.

Rahul did not commit himself and get caught out. He allowed the ball to come to the bat, watching it till the last moment. And anything outside his eyeline, he ‘left.’

The point is when you ‘leave’ so well — Rahul was letting go deliveries that were only just outside the off-stump — frustration sets in for the bowler.

And then his line gradually shifts. And when it gets to middle-and-leg, it is easy pickings.

When the ball was at the stumps, Rahul’s defensive bat appeared as broad as the sight screen.

And when it was pitched up at the stumps, he drove beautifully. Some of his cover-drives, all grace, elegance and class, took one’s breath away.

The manner Rahul got on top of the bounce to punch the pacemen between cover and point off the backfoot showed he was comfortable batting on such pitches. The body weight was beautifully distributed, and there was balance.

Rahul can be a compulsive hooker and puller and the South African pacemen did bounce at him. However, Rahul, his sights set on a big innings, did not fall for the bait. He let these deliveries go.

Only in the later stages of his innings did Rahul venture into the hook and was fortunate that a top-edge fell just short of Jansen running in from long-leg.

Constructing an innings, brick by brick, is an art. You got to be diligent, show enterprise when the occasion demands and keep your concentration levels high.

Dravid always spoke about ‘staying in the present’ and switching ‘on’ and ‘off’ between deliveries to retain focus.

Rahul did very much that, never allowing his mind to drift. He was on the ‘ball’. And he had a willing opening partner in the resilient Mayank Agarwal.

The value of opening partnerships on away campaigns cannot be overemphasised.