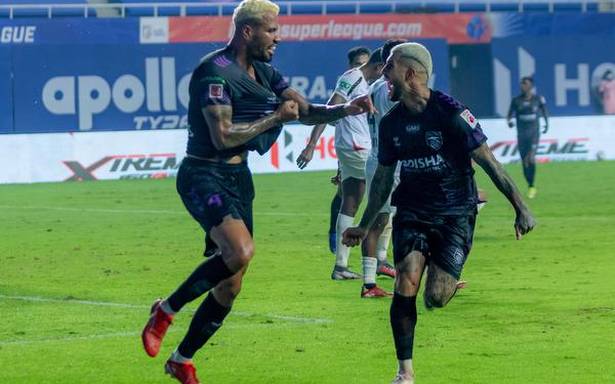 Odisha FC got back to winning ways with a 1-0 victory over NorthEast United FC in the Indian Super League at the Tilak Maidan Stadium in Vasco on Friday.

Odisha’s key striker Jonathas Cristian, returning from injury, started on the bench before pairing up with fellow substitute Thoiba Singh to head the ball into the gaping net in the 81st minute.

For Odisha, the first opportunity came in the 17th minute when Aridai Suarez’s free kick rattled the post.

However, the first half belonged to NEUFC which went on the attack right from the start. With Deshorn Brown back, Khalid Jamil’s side produced shot after shot. It had 13 compared to two from Odisha at the end of the opening period.

In the second session, Odisha coach Kiko Ramirez decided to shift gears and replaced Lindon Krasniqi with Jonathas. That turned the tide in the team’s favour.

Khalid Jamil’s NEUFC, debilitated in the absence of midfield talisman Federico Gallego, tried to press up the field, but it was all in vain. Brown’s multiple shots flew off target and Coureur’s key miss in the 62nd minute cost NEUFC dear as Jonathas’ strike gave Odisha full points and NEUFC its third defeat.