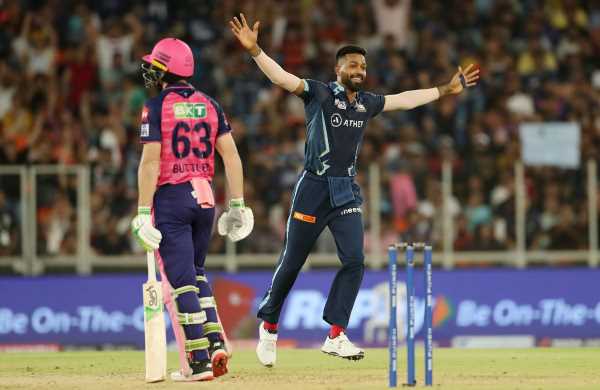 In his own words, Hardik Pandya ‘saved the best for the best’ as far as his bowling was concerned to guide the Gujarat Titans to the IPL title in their debut season.

The Gujarat Titans captain registered match-turning figures of 3/17 to help his team outclass the Rajasthan Royals by seven wickets in the final at the Narendra Modi stadium in Ahmedabad on Sunday, May 29, 2022.

Hardik, who hadn’t bowled much coming into the title clash, claimed the key wickets of Sanju Samson (14), Jos Buttler (39) and Shimron Hetmyer to rip apart the Royals batting line-up in the middle overs.

Bringing himself into the attack in the ninth over, Hardik took just two deliveries to strike as he dismissed Samson, who miscued the pull shot and was caught at point.

Hardik in the company of leg-spinner Rashid Khan built the pressure in the middle overs with some disciplined bowling, while chipping away at the wickets.

The most important strike for Gujarat was IPL 2022’s highest run-getter Buttler, who was caught behind after he got an outside edge trying to steer Hardik to third man.

Buttler’s wicket dented the Royals’ chances of finishing with a competitive total as they were reduced to 82/4 in 13 overs.

Hetmyer looked to counter-attack and score some quick runs, but his plans were thwarted by Hardik as he was caught and bowled by the pacer.

Pandya’s bowling helped restrict the Royals to 130/9, which the Gujarat Titans overhauled easily despite a couple of early wickets.