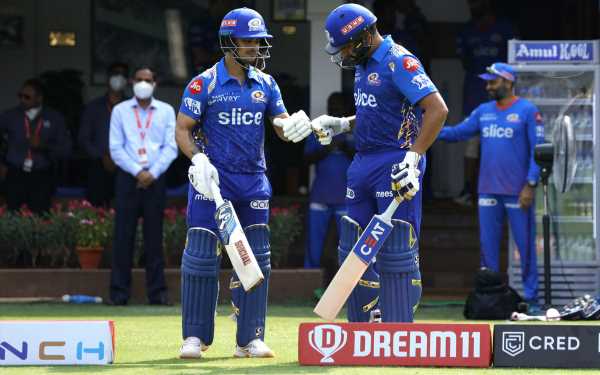 ‘I will be concerned if they are not hitting the ball well or if they don’t have that confidence, but both of them have been batting well out there in the middle as well in the nets.’

Mumbai Indians’ head coach Mahela Jayawardene backed out-of-form openers Rohit Sharma and Ishan Kishan despite their poor run with the bat in IPL 2022, saying he is not concerned as the duo are hitting the ball really well.

Rohit, who fell for a duck against Chennai Super Kings on Thursday, has managed only 114 runs from seven innings with a highest score of 41 in IPL 2022.

“It has been up and down. To be honest, Ishan batted really well in the first couple of games, and then a bit of a slide. Ro (Rohit) has been hitting the ball really well, he gets good starts, 15-20 runs, looking good and then not being able to convert,” Jayawardene said after MI went down by three-wickets to Chennai Super Kings.

Similar has been the case of Ishan Kishan, whom Mumbai bought for a huge Rs 15.25 crore, — the highest buy at the IPL 2022 auction.

The young left-hander, who also perished for a duck against CSK, has managed only 191 runs from seven games. He started the tournament with two half-centuries but has failed with the bat in the last five games.

“When that happens, and when you get out early, you feel that nothing is going your way. I have been a batsman, that is part and parcel but I will be concerned if they are not hitting the ball well or if they don’t have that confidence, but both of them have been batting well out there in the middle as well in the nets,” added the former Sri Lankan batting great.

He said it was necessary to back their abilities and if the two work hard and go through the processes, a turnaround was on the cards.

“You need to back the ability, the confidence, these are the guys who have played a lot of IPL cricket, understand what needs to be done and just need to get in, work hard, go through the process and it will turn around,” the Mumbai Indians coach added.

Mumbai Indians have slumped to one of their worst starts in IPL history with seven losses in a row.