Ishant needs to figure out his role in the team, says McGrath 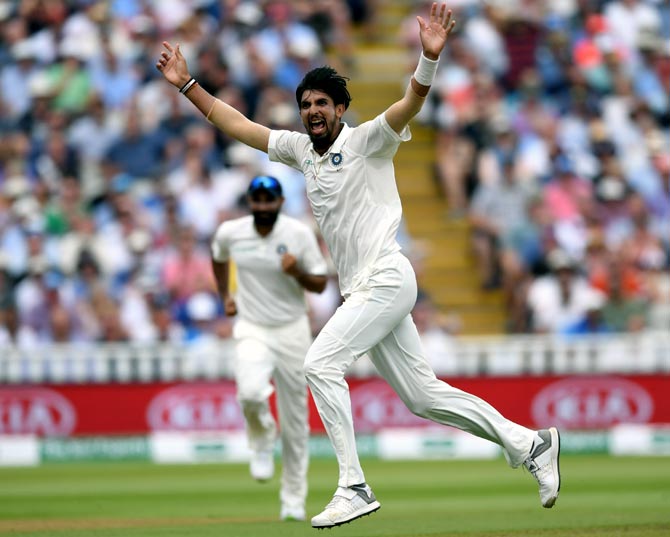 Australian pace legend Glenn McGrath feels Ishant Sharma needs to figure out his role in the Indian team, observing that he has been more of a workhorse than a strike bowler.

Ishant had a good first Test against England, where he took seven wickets including a five-for in the second innings and the Aussie pace legend is happy that he is slowly adapting to conditions.

“When Ishant started off, he took the world by storm bowling good pace. He is probably not bowling at the same pace. But he is much more experienced now with good control. The Edgbaston Test showed that Ishant has started adapting a bit more,” McGrath said on the sidelines of fast bowlers’ camp organised by Haryana Cricket Association and MRF Pace Foundation.

However, McGrath acknowledged the fact that playing on sub-continent tracks might have contributed to a not so impressive record of Ishant, who has taken 244 wickets in 83 Tests.

“I guess a lot of pitches in India are tough to play on. Probably, he didn’t bowl that many spells. May be, he has been used more as a workhorse rather than an attacking bowler. I think he needs to find in what role he fits in,” said the Aussie pace legend, who has 563 wickets in 124 Tests.

Ishant’s stock ball is the one angled into the right-hander but he has not got enough balls to straighten.

For someone, who was immaculate with his top of off-stump line, McGrath believes that Ishant will need to hit the seam more often.

“You have got to hit the seam and may be a bit of movement off the pitch will help. My weapon was bounce and occasionally bit of seam movement. In my case, there was Warnie, Lee and Gillespie bowling from other end to build pressure.

“I liked bowling long spells and that helped. If you are only bowling short of length always, you are looking at stopping runs but you need to take wickets.”

He feels that a month and a half month at Sussex under former Australian pacer Jason Gillespie has helped him evolve as a bowler.

“If you are bowling same lengths in India, Australia and England, you can’t be successful. In England, where the ball swings, you have got to be a bit fuller, so his stint at Sussex did him a world of good.

“My good mate Jason Gillespie has done incredible work as a coach. I played county in 2000 and 2004 and learnt a lot to bowl in English conditions.”

Since South Africa series, Indian bowling attack has got 20 wickets on all four Tests outside the sub-continent and McGrath attributes it to having same attack for a considerable amount of time.
“When you got the same bowling attack for a while, you can build in confidence,” he agreed.

But the Indian batting in both innings disappointed him.

“I was a bit disappointed in the manner India batted as they have a quality line-up. But if you take out Virat, they have struggled. May be it’s not as settled as the bowling.”

What would have been his strategy, if he had to bowl to Virat Kohli? “I would have enjoyed the challenge (of bowling to Kohli) no doubt. It’s just about getting enough balls in right area. You don’t see any obvious weakness there and it’s just about building pressure.

“I loved bowling to guys like Sachin Tendulkar, Brian Lara and Rahul Dravid because as a bowler, you want to step up and enjoy that challenge. By the end of his career, Kohli will be up there with guys like Sachin and Rahul.”

India will be touring Australia during the end of the year and McGrath said that if the four bowlers are fit, then India will find it challenging.

“If our three quicks Mitchell Starc, Josh Hazlewood and Pat Cummins are back in park along with Nathan Lyon, these four are as good as any bowling unit in the world. If they perform, it will make a huge difference. Obviously, David Warner and Steve Smith are paying price for whatever has happened. There will be a big hole as they are unlikely to be back then.”

The help for the bowlers with Dukes is for everyone to see but McGrath believes that one ball for all conditions is not a solution.

“I think it might be the bowlers who are saying this. Dukes is a great ball to bowl with. When I played matches with Dukes, my average was six and half wickets per Test match while with Kookaburra, it would be 4 and half. “

“My problem when I retired was that wickets in Australia were all similar. So when we travelled we faced problems in different conditions. Playing with Dukes in Australia would have been like Christmas,” he laughed.

On a serious note, he is against the idea that is being floated by many bowlers.

“I think it makes a better cricketer if you can bowl with all three — Dukes, Kookaburra and SG Test. Cricketers these days don’t adapt much as they would have liked to,” McGrath signed off.