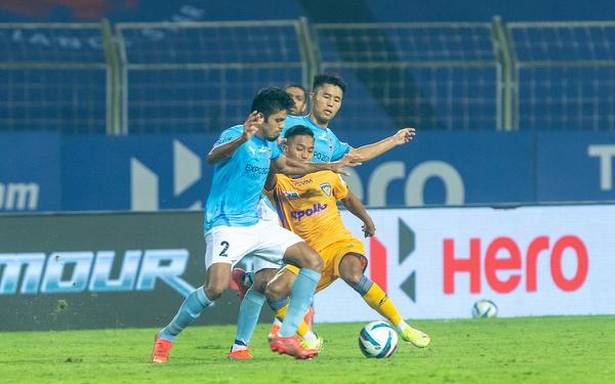 Mumbai City FC was made to work hard till the dying minutes of the contest before the defending champion’s persistence paid off as Rahul Bheke’s late winner handed Chennaiyin FC its first defeat of ISL Season 8 at the Jawaharlal Nehru Stadium in Fatorda on Wednesday.

The Islanders’ 1-0 win gave them a four-point cushion at the top of the table. Mumbai City has 15 points from six matches while Jamshedpur FC has 11 from the same number of games.

The goal came in the 86th minute when Ahmed Jahouh’s free kick found Bheke, who headed home. Chennaiyin custodian Vishal Kaith did not cover himself in glory as he charged for the ball and left the goal open for the header.

It was a match that pitted two contrasting styles: Mumbai’s attacking play versus Chennaiyin’s sturdy defence.

For the majority of the game, CFC’s strategy of having at least five men behind seemed to be working as Mumbai struggled to break through and pose a serious threat.

In the first half, Mumbai dominated possession and was the team on wheels in the first 30 minutes of the game.

The title holder could have gone ahead quite early with the CFC goalkeeper making his first blunder of the game. Amey Ranawade chipped into the box and Kaith charged at the ball that was nowhere near him. However, Igor Angulo’s header hit the post and the ball rolled out.

Chennaiyin got into its groove in the final 10 minutes of the first half and started positively after the break, but couldn’t convert the half chances that came its way.

Chennaiyin’s best chance came in the 48th minute when Jerry Lalrinzuala sent in an inch-perfect cross to Lukasz Gikiewicz, who couldn’t control the ball as his legs got tangled before the Mumbai ’keeper came to his side’s rescue.