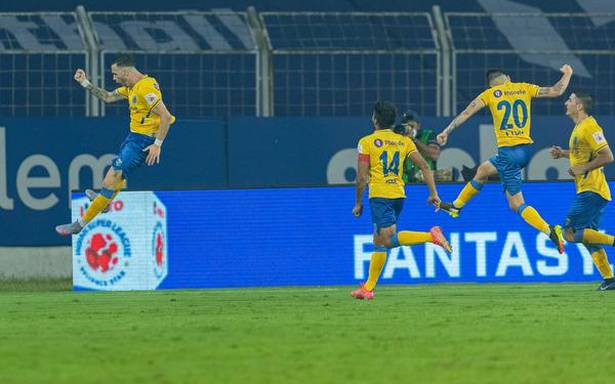 Kerala Blasters pulled off a coup on Sunday night.

The men from Kochi scored a stunning 3-0 win over table-topper Mumbai City at the Jawaharlal Nehru Stadium, Fatorda. They did that with a fair amount of flair too; one of their goals should count among the best of the season, while another was lovely to watch.

The eye-catching goals from Sahal Samad and Alvaro Vazquez had already made life difficult for Mumbai when Pereyra Diaz struck from the penalty spot.

The Blasters had started very much the underdogs as they had managed only one win in their five previous games. Mumbai, on the other hand, had won five of its six and was on a four-match winning streak which came to an end on this night.

The Kerala men didn’t give space to Mumbai’s dangerous frontline to create enough chances even as they created their own at the other end.

One of those opportunities came in the 27th minute when Pereyra Diaz provided a pass to Sahal, who waited for the ball to bounce in front of him and volleyed it home.

Early into the second half came that magical moment from Vazquez. His volley from the edge of the box had power and precision, and had class written all over it.

Four minutes later, Mumbai was reduced to 10 when Mourtada Fall earned a second yellow for a tackle on Diaz. The resultant penalty was easily converted by Diaz.

From 0-3 down, it proved an uphill task even for Mumbai; it, however, remained on top with 15 points. Blasters moved to fifth with nine points from six matches.