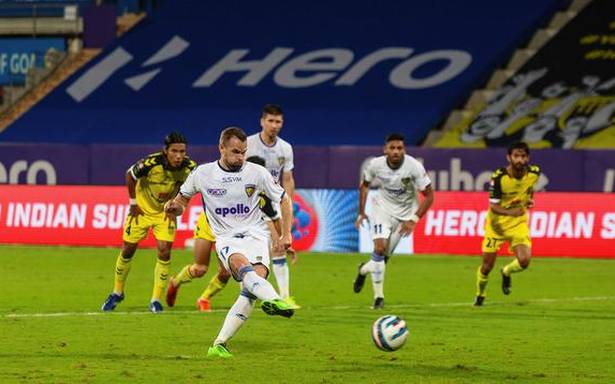 Chennaiyin FC appeared out of sorts but eked out a 1-0 win over Hyderabad FC — via Vladimir Koman’s penalty — in their inaugural Indian Super League match at the Bambolim Stadium, Goa, on Tuesday.

Hitesh Sharma chested a high ball in the box but Chennaiyin captain Anirudh Thapa got to it ahead of him before being fouled. Koman, a 32-year-old veteran, who has played in Asia and Europe, didn’t falter under pressure to net home the resultant spot kick.

All credit to Chennaiyin’s four-man defence that stayed strong even as its midfield and forward-line bungled at various stages of the match.

Struggling for a shot on target, Chennaiyin almost found the back of the net in the 56th minute when Lalrinzuala Chhangte’s quick run from the right saw his left-foot shot being fingered away by ‘keeper Laxmikant Kattimani.

The start of the second half saw Hyderabad press hard like how it did in the first, but after the goal, it was Chennaiyin that fared better.

In a desperate bid to equalise, Hyderabad’s head coach Manolo Marquez made four substitutions in a matter of two minutes but nothing went right.

Hyderabad had more possession and a clearer sense of purpose in the first session, unlike Chennaiyin which didn’t show any intent and had no proper shots on target.

Bartholomew Ogbeche was his own self inside the box while Edu Garcia made some incisive passes but the best chance for Hyderabad came when Nikhil Poojary did a wonderful turn to unleash a shot that zoomed over the crossbar.

Chennaiyin head coach Bozidar Bandovic will probably need to rework his combination when it takes on NorthEast United on November 29.