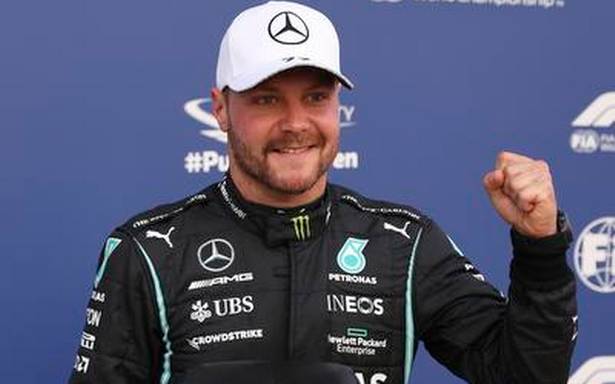 Bottas’ final flying lap saw him beat Hamilton by 0.096 seconds in a qualifying session that set the grid for Formula One’s second-ever sprint

Valtteri Bottas edged out Mercedes teammate Lewis Hamilton and championship leader Max Verstappen at the Temple of Speed on the night of September 10 in the return of sprint qualifying for the Italian Grand Prix.

Bottas’ final flying lap saw him beat Hamilton by 0.096 seconds in a qualifying session that set the grid for Formula One’s second-ever sprint, which will determine the starting lineup for the main race on September 12. Red Bull driver Verstappen was 0.411seconds behind the Finn, who is leaving Mercedes at the end of the season for Alfa Romeo.

“That qualifying lap was nice and it feels good when you get a nice lap in. It was good fun, I enjoyed and I feel relaxed now everything is sorted for the future,” Bottas said. “Really pleased for the team today, the car has been so good and next year will be exciting for me and I’m looking forward to it.” “But now I’m focused on tomorrow’s sprint race and starting from the front I’m expecting to get maximum points tomorrow and then do the best job I can on Sunday.”

That’s a much tougher task as Bottas will start at the back of the grid on September 12 — he is going to take a new power unit and will receive a penalty for doing so.

Sprint qualifying had its debut at Silverstone, where Hamilton was fastest in qualifying but Verstappen topped the seven-time world champion in the sprint to take pole for the British GP.

The sprints will be over 100 kilometers and the top three finishers will also receive points toward the championship. First place will receive three points, second place two points, and third place one point.

Verstappen won the Netherlands GP on September 5 and the Red Bull driver moved three points ahead of seven-time world champion Hamilton. Should Hamilton win Septemeber 11 sprint and Verstappen finish fourth or worst, the two will start the main race level at the top.

“Every point counts," Hamilton said. "Firstly, congratulations to Valtteri, he did a mega lap. It was looking really good for us on my side up until then but he went quicker and I couldn’t match it, well deserved.”

“We’ve lost the championship [in 2007] by one point, we know how that feels. There’s been a lot of points lost this year on both sides, so every point counts. These sprint races definitely can help.”

Lando Norris will start the sprint in fourth position, just ahead of Daniel Ricciardo and Pierre Gasly — last year’s shock winner at Monza.

Carlos Sainz was seventh, with Ferrari teammate — and 2019 winner — Charles Leclerc eighth quickest at the Italian team’s home circuit. Sergio Pérez and Antonio Giovinazzi round out the top 10.

Hamilton was quickest in practice earlier, ahead of Verstappen and Bottas. Verstappen has a poor record at Monza, where he has never set foot on the iconic podium. His highest finish is fifth. In contrast, Hamilton is a five-time winner at the Temple of Speed and has three more podiums.

“I think for us this track is always going to be difficult,” Verstappen said. “We struggled a little bit more than we wanted in free practice but I think we recovered quite well throughout this qualifying so I’m still happy to be third here and I think, for the race, hopefully we can be a bit closer.”