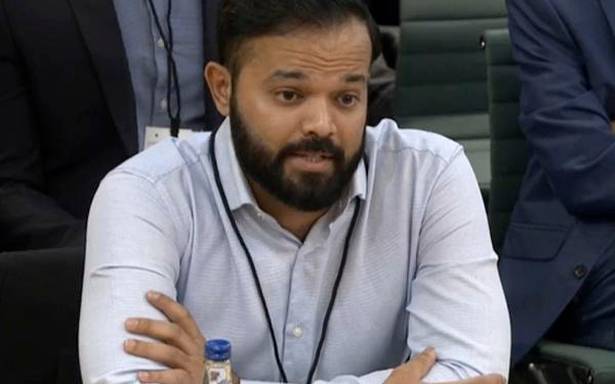 The following are key statements from former Yorkshire player Azeem Rafiq and the others questioned during his testimony to the parliamentary Digital, Culture, Media and Sport (DCMS) panel on Tuesday on the racism he encountered at the county team:

"From early on there was a lot of ‘You lot sit over there near the toilets’. The word ‘Paki’ was used constantly, no one ever stamped it out. All I wanted to do was play cricket."

ON RACISM FROM TEAM-MATES

"I felt isolated. (Yorkshire batsman Gary) Ballance came over and said: ‘Why are you talking to him, he’s not a Sheikh, he hasn’t got oil.’ Going past a corner shop, I was asked if my uncle owned it."

"(Ballance) used a racial slur in 2017 and the pre-season tour. I want to address Gary’s statement. There was a narrative there that we were the best of team mates.

"When he came to the club from Derby I saw in him what I saw in myself, as an outsider. A lot of players called Gary things that were completely out of order, but it was such a norm that no one said anything."

ON BEING FORCED TO DRINK ALCOHOL AGED 15

"My first incident of drinking, I was 15, I got pinned down at my local cricket club and had red wine poured down my throat. The player played for Yorkshire and Hampshire."

ON THE USE OF ‘STEVE’ AND ‘KEVIN’ FOR ASIAN ORIGIN PLAYERS

"Everyone called (India’s Cheteshwar Pujara, ‘Steve’), high-profile players around the world, and it shows the institutional failings. ‘Kevin’ was something Gary used for people of colour in a derogatory manner.

"Gary and Alex Hales got close to each other playing for England but I understand Alex went on to name his dog Kevin because it was black. It is disgusting how much of a joke it became."

ON RACISM ACROSS THE COUNTRY AND PROBLEMS SPEAKING OUT

"Without a shadow of a doubt, this is replicated up and down the country… I’d like to see it as progress that people feel they can come forward and not be smeared against and discredited."

"All I wanted was acceptance, an apology, understanding… When I raised the complaints again, it was a complete denial. I was lucky to be supported by certain members of the press but I felt like social media was my voice."

ON WHY HE RETURNED TO YORKSHIRE FOR A SECOND SPELL

"In my first spell, there were things that happened that I didn’t see for what they were. I was in denial.

"In 2016 I started well and I was training with Derbyshire. They didn’t have the finances to offer me a contract. I was in a position where putting food on the table was difficult, so that’s why I went back.

"For a person of colour to accept you’re being treated differently because of your race or religion is tough to take. You’re always asking, ‘Why?’ I didn’t want to believe it. After the loss of my son, I couldn’t look the other way."

"Rooty’s a good man. He has never engaged in racist language. I found it hurtful because Rooty was Gary Ballance’s housemate.

"Maybe he didn’t remember it (nights out when racist language was used), but it just shows the institution that a good man like him cannot remember those things."

ON THE PROFESSIONAL CRICKETERS ASSOCIATION

"I found the PCA stance incredibly inept. It was ‘Oh, we’ve got members on both sides’. You’re protecting the perpetrators and you have no interest in where this is taking me?

"The PCA kept telling me when the report comes out, they would support me. Once it did, they said we have no powers, we can just push the ECB. An organisation that should have been there for me and supported me left to fight on my own."

"After my Sky interview, I took a call from Hoggard and he said, ‘I’m sorry if some of the comments made you feel how you described it’. I said ‘Thank you, appreciate it’."

"There were a number of signals throughout the process. I was asked by the CEO (Mark Arthur) to abandon the process and investigation."

"An employment tribunal had been settled and the CEO did not want to apologise. I said Azeem Rafiq would be part of the process of healing and reconciliation and was told he would not be welcome."

"I would say please understand that we are really sorry for the experiences you may have been through trying to experience cricket in this country."

"We know we may have let you down. We will fix it fast. We know the survival of our sport depends on it."

FORMER ENGLAND BOWLER TIM BRESNAN, WHO WAS NAMED BY RAFIQ IN THE TESTIMONY

"For any part I played in contributing to Azeem Rafiq’s experience of feeling bullied at Yorkshire, I apologise unreservedly."

"I am going to have to be an active chairman. This is an organisation that has been hammered left, right and centre. The hurt Azeem has gone through, others have gone through as well."

"By golly, we have to move on it quickly. There are too many people and staff suffering."