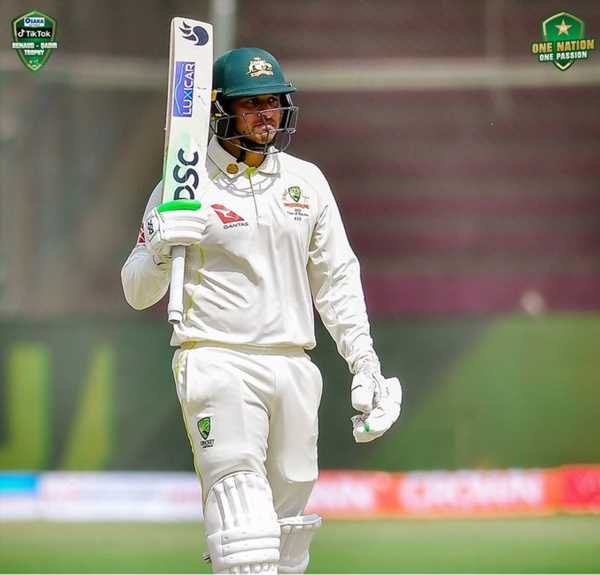 Usman Khawaja’s marathon 160 and Alex Carey’s career-best 93 helped Australia rack up 505 for 8 against Pakistan on Day 2 of the second Test in Karachi on Sunday.

It was a day of painstaking accumulation at the National Stadium where the Pakistan bowlers kept the run rate under check but only five wickets fell in three sessions for all their hard work under a harsh sun.

Mitchell Starc saw off 95 deliveries for his dour unbeaten 28 and Australia captain Pat Cummins was unbeaten on nought at the close.

Earlier, after Australia resumed on 251-3, Shaheen Afridi subjected Nathan Lyon to a bouncer barrage but the night-watchman did not flinch and went on the attack with the pull shot.

Lyon hit five fours in an entertaining 38 before he had his stumps rearranged by an express delivery from Faheem Ashraf, ending a 54-run stand with Khawaja.

Khawaja had shelved the reverse sweep on Saturday but Pakistan were convinced they had him caught in the slips when the opener attempted the shot against Nauman Ali.

However, replays ruled out any ball-bat contact and Pakistan lost a review.

Khawaja duly brought up his 150 but could not better his highest score of 174 as Sajid Khan dealt a double blow.

The off-spinner trapped Travis Head lbw for 23 and spun one past Khawaja’s bat to hit the off-stump.

Cameron Green, who was not even born when Australia last toured Pakistan in 1998, made 28 before Nauman confounded him with a sharp-turning ball that pitched outside leg stump and hit the off.

Carey swept well and Starc batted resolutely to frustrate Pakistan and take Australia past the 500-mark.

Pakistan captain Babar Azam brought himself on to bowl, partly to give respite to his overworked spinners, and struck in his first over.

In his haste to reach the 100 mark before close of play, Carey went for a slog sweep but lost his stump to a delivery from part-time spinner Babar that kept low.

Carey left the field to a standing ovation from his team mates after adding 98 runs with Starc for the eighth wicket.