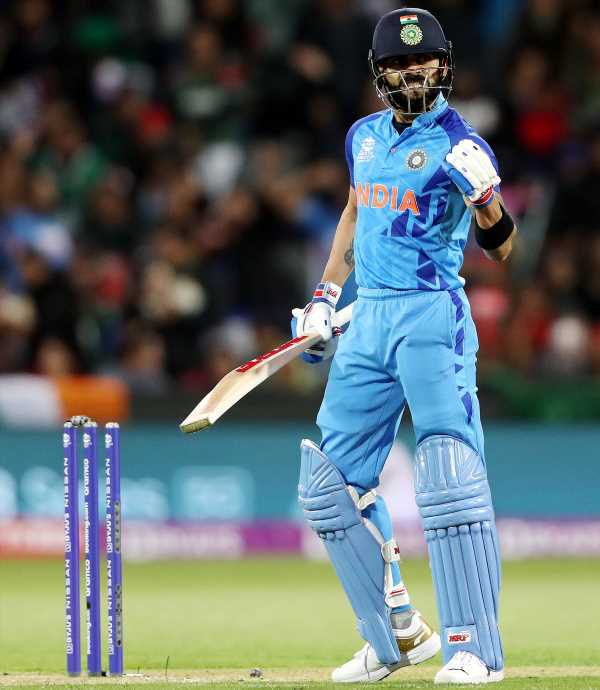 Virat Kohli struck his third half-century in four games as India edged out Bangladesh by five runs in a rain-hit match to close in on a spot in the semi-finals.

After Rohit Sharma perished in the fourth over, Kohli rallied India with a 66-run stand for the second wicket with K L Rahul, with the latter hitting a quickfire half-century.

Kohli looked keen to take on the bowlers right from the start as he hit pacer Taskin Ahmed for back to back fours in the fifth over before hitting a boundary each off Mustafizur Rahman and Shoriful Islam.

After Rahul returned to the dugout after scoring 50, Suryakumar Yadav — the World No 1 batter in T20 Internationals — played a quickfire cameo of 30 from 16 balls to prop up the total in the middle overs.

Hardik Pandya (5), Dinesh Karthik (7) and Axar Patel (7) fell cheaply as India looked in danger of finishing around the 160 run mark.

Kohli kept the runs coming with regular boundaries towards the end as he changed gears in style. He was on 32 from 29 balls in the 15th over, before he hit three fours off successive deliveries across two overs.

After bringing up his fifty from 37 balls, Kohli flicked pacer Hasan Mahmud for a four over square leg, before hitting a magnificent straight drive for a six over long-on off the next ball.

Kohli finished unbeaten on 64 from 44 balls, hitting eight fours and a six, and not surprising it came at his favourite venue — the Adelaide Oval.

It was at this venue that Kohli got his first Test century in 2012, before hitting a century in each innings on his captaincy debut in 2014.

Kohli boasts of a staggering record at the Adelaide Oval, with 907 runs in 14 innings in international cricket — including three centuries and a fifty in four Tests, two centuries in four ODIs and 154 runs in two T20 Internationals.

‘I absolutely love playing on this ground. Right from the nets at the back, as soon as I enter, it makes me feel at home,’ Kohli said after the match.

This was the third time he remained unbeaten in T20 World Cup 2022 after his 82 not out versus Pakistan and 62 versus The Netherlands, with the 12 against South Africa being the only blip in a dream tournament so far.

Kohli came into the World Cup with a lot of question marks over his place in the team, but all those doubts seem a distant memory now.