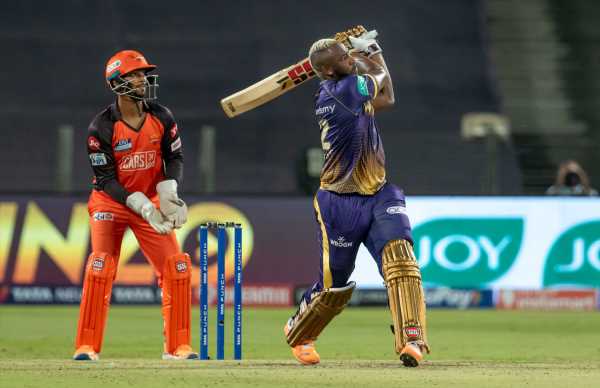 Andre Russell starred with both bat and ball as Kolkata Knight Riders retained hope for a place in the IPL 2022 play-offs with a win over Sunrisers Hyderabad at the MCA stadium in Pune on Saturday night.

The KKR hitman top scored for his team with an unbeaten 49 off 28 balls and also claimed maximum wickets in his spell of 3-22.

KKR were 94-5 when Russell walked to the crease. Dre Russ and Sam Billings steadily rebuilt the innings. Both batters took a cautious approach and held off from hitting unconventional shots early on.

Hyderabad were aware of Russell’s expertise against the spinners and kept bringing on the pace bowlers, but the ploy backfired. Russell smashed boundaries off Umran Malik, T Natarajan and Bhuvneshwar Kumar off consecutive overs.

Billings chipped in with a few boundaries but after his dismissal in the 19th over, Russell went into ‘God Mode’ in the final over which spinner Washington Sundar was assigned to deliver.

Russell’s eyes lit up immediately, much like a hungry tourist at a breakfast buffet, as he chomped through the deliveries, starting with two singles before finishing with three sixes off the final four deliveries.

Kolkata, who had been stuttering at the end of 10 overs, finished a respectable 177-6. 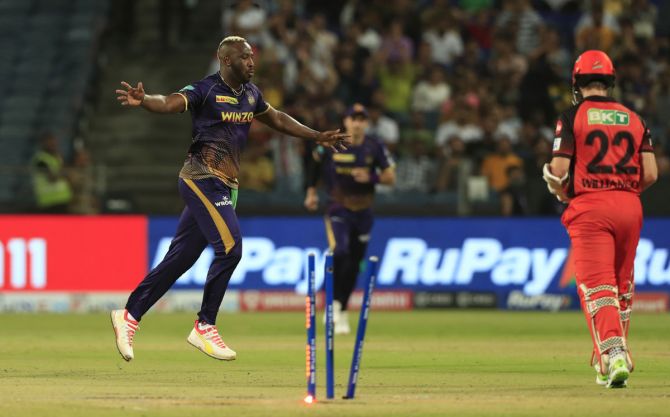 Onto the second half and Sunrisers were 30-0 at the end of 5 overs when Russell was brought into the attack and almost on cue, he delivered. Kane Williamson attempted an unorthodox shot down the leg side, leaving his stumps exposed.

The SRH skipper miscalculated the line and ended up bowled in rather embarrassing fashion, more akin to a tail-ender than a specialist batter of his calibre.

With Hyderabad needing a miracle to get back into the game, Russell put it well beyond their reach by claiming two wickets in the 18th over.

Off the second delivery, Sundar departed trying to pull a short-pitched ball, miscuing it and holing out to Venkatesh Iyer.

Four balls later, Marco Jansen became Russell’s third victim after getting a faint nick off an off-cutter that flew to wicket-keeper Sam Billings.

Russell then finished with a remarkable four dot balls in the final over of the match. Reflecting on his batting in the post match interview, Russell was very clear with his strategy: ‘You have to tough it out at times and stay till the back end, happy tonight.’

‘Before the last ball of the 19th over was bowled, I said, “Sunil, try and get a boundary, but let me start the over with the spinner.” Off-spinner to a right-hander, it’s like a kid in the candy shop. I got full tosses and I put it away,’ Russell concluded as he walked away with a host of awards.